Scalable representation of time in the hippocampus 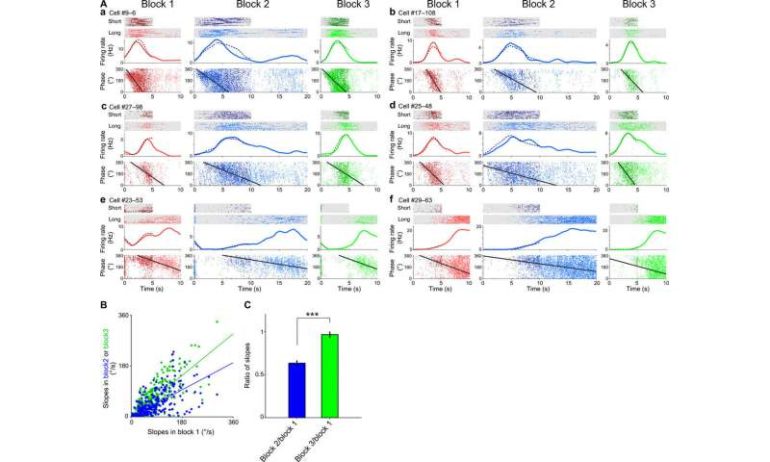 Hippocampal time cells can encode specific moments of organized experiences in time to support hippocampal functions of episodic memory. But little is known about the reorganization of time cells during timely changes of episodes. Akihiro Shimbo and a research team at the Riken center for brain science and the department of psychology, Keio University in Japan investigated CA1 neuronal activity – that are critical for autobiographical memory, mental time travel and autonoetic consciousness in humans. During temporal bisection tasks they designed the sets of time intervals to be extended, discriminated or contracted, across the blocks of trials. The team scaled the theta phase precession and theta sequences of time cells to preserve the fine temporal relationships between pairs in theta cycles. Using rat models, they showed how the theta sequences reflected the decisions of rates on the basis of their time. The findings demonstrated how scalable features of time cells may support flexible temporal representations of memory formation.

Neuroscientists propose animals to have a cognitive map to serve as an internal representation of the relationships between entities in the world and to support flexible behavior. The hippocampus can provide cognitive maps for spatial navigation since hippocampal cell assemblies can organize map-like environmental representations. Hippocampal place cells use both rate and temporal (time) coding for space representation. Rate coding takes the form of receptive fields of locations. Spike timings of place cells can be strongly modulated by concurrent theta oscillations of 4 to 10 Hz, while exhibiting spike phase shifts as a function of distance relative to the center of the receptive field. With these two forms of rate and temporal coding, spatial representations of the hippocampus involved both positional and relational information. Relative positional relationships can provide more fundamental information for spatial recognition in the hippocampus than absolute positions. The hippocampus also provides a cognitive map for nonspatial entities including time-based information. However, not many studies are focused on investigating the systematic reorganization of representations of time in the hippocampus. In this work, Shimbo et al. studied the scalability of time in the hippocampus. The hippocampus represents information of elapsed time by the sequential activity of time cells. Previous reports had detailed how several brain regions including the prefrontal cortex and midbrain were involved in the perception and representation of elapsed time.

During the work, the researchers performed bisection tasks for rats to discriminate between long and short intervals to receive a reward. They noted the majority of time cells in the CA1 region to represent temporal information at scale across trial blocks. Shimbo et al. investigated the temporal structures of sequence activity of time cells associated with theta oscillations in the hippocampus to identify the mechanisms underlying the scalable representation of time. When analyzing the data, they noted the activities of time cells to reflect the rats’ decisions on the basis of their perception of time. The findings showed a common circuit mechanism that underlay map-like representations of spatial and non-spatial information in the hippocampus due to the similarities between place cells and time cells. The scientists used high-density silicon probes to record from the hippocampal CA1 neurons in the rats during the task behavior. They categorized the units as putative pyramidal cells or interneurons on the basis of their waveforms and firing rates.

Shimbo et al. trained the rats on the temporal bisection task and set time intervals to discriminate between blocks of trials. During the experiments, they forced the rats to run on a treadmill for long or short durations of time. After the forced run, they selected the left or right arm in a Y maze. The researchers provided water drops as a reward at the completion of each task at the correct arm. They first assessed the time-dependent activities of pyramidal cells and categorized 22.2 percent of pyramidal cells as time cells. They also determined if the time representation of CA1 pyramidal cells were scalable to a shrinking direction—to indicate the time representation of CA1 pyramidal cells to be scalable in both expanding and shrinking directions.

Task dependency on the scalable representation of time

To test how the scalable features of time also depended on task demands, Shimbo et al. trained another set of rats on light discrimination tasks in which the animals were not required to discriminate between time intervals. During the tasks, they forced the rats to run on a treadmill at short or long intervals after which they required the animals to choose the left or right arm of the Y maze in a light-guided manner. They then investigated the CA1 neuronal activity in rats performing the light discrimination tasks. The researchers classified 7.5 percent of the pyramidal cells as time cells, which were significantly lower than those from the temporal bisection tasks. Based on the outcome, the formation of time cells depended on the demands of the task, while also having scalable representation of elapsed time information.

Hippocampal cell assemblies generated sequential structures during space navigation in single theta cycles known as theta sequences. These cycles compressively represented trajectory sequences of the past, current and future positions. Shimbo et al. checked for the presence of theta phase precession as a function of elapsed time during the temporal bisection task. The local field potential was dominated by a robust theta frequency (4 to 10 Hz) oscillation during the interval period. The team studied the phase-time relationships of single neurons and found that 77.3 percent of the time cells presented phase precession. Shimbo et al. investigated the temporal structure of spike sequences of time cell assemblies in single theta cycles to understand if time cell assemblies formed theta sequences during the task.

The results presented temporal relationships of cell pairs in single theta cycles. The team then assessed if the theta sequences of the time cells were merely consequences of phase precession of individual neurons, or if they had higher correlative structures than those predicted from phase precession. The results showed that the theta sequences of the time cells were not merely the consequence of phase precession of individual neurons. Together, these outcomes showed how the theta sequence of time cells were scalable across the trial blocks and how fine temporal relationships between cell pairs were conserved within single theta cycles. The scientists also studied how the assembly of time cells reflected recognition of elapsed time in the rats. The work showed how these results indicated the activity of time cell assemblies and actually reflected animals’ decisions during the test trials.

In this way, Akihiro Shimbo and colleagues investigated the scalability of time cells in the hippocampus relative to rate and temporal coding. The results indicated scalability for temporal representation in the hippocampus and hippocampal pyramidal cells relative to the two factors of rate and time. The work suggests an underlying common circuit mechanism with map-like representations of spatial and nonspatial information in the hippocampus. Such scalable, map-like architectures of space-time information will allow for the formation of flexible memory to adapt to complex environments.

Work from home? Things I wish someone had told me before I started

In Apps and WebComputer science
on 8 March 202110 min read

Citation:
Scalable representation of time in the hippocampus (2021, February 19)
retrieved 21 February 2021
from https://medicalxpress.com/news/2021-02-scalable-representation-hippocampus.html