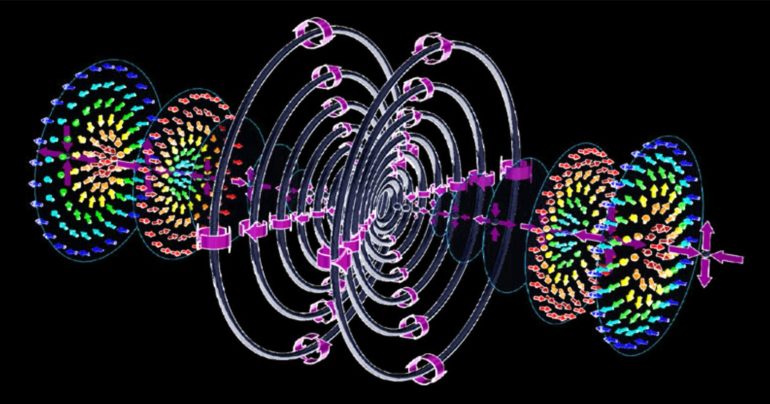 Topology in optics and photonics has been a hot topic since 1890 where singularities in electromagnetic fields have been considered. The recent award of the Nobel prize for topology developments in condensed matter physics has led to renewed surge in topology in optics with most recent developments in implementing condensed matter particle-like topological structures in photonics. Recently, topological photonics, especially the topological electromagnetic pulses, hold promise for nontrivial wave-matter interactions and provide additional degrees of freedom for information and energy transfer. However, to date the topology of ultrafast transient electromagnetic pulses had been largely unexplored.

In their paper Nat. Commun., physicists in the UK and Singapore report a new family of electromagnetic pulses, the exact solutions of Maxwell’s equation with toroidal topology, in which topological complexity can be continuously controlled, namely supertoroidal topology. The electromagnetic fields in such supertoroidal pulses have skyrmionic structures as they propagate in free space with the speed of light.

Skyrmions, sophisticated topological particles originally proposed as a unified model of the nucleon by Tony Skyrme in 1962, behave like nanoscale magnetic vortices with spectacular textures. They have been widely studied in many condensed matter systems, including chiral magnets and liquid crystals, as nontrivial excitations showing great importance for information storing and transferring. If skyrmions can fly, open up infinite possibilities for the next generation of informatics revolution.

“This is the first know examples of propagating skyrmions,” says Prof. Nikolay Zheludev, the project supervisor, “the fundamental topological constructs previously observed as spin formations in solids and localized electromagnetic excitations in the nearfield of metamaterial patterns.”

The supertoroidal pulse is as a generalization of the so-called “Flying Doughnut,” a toroidal single-cycle pulse with space-time non-separable structure with links to vector singularities and non-radiating anapole excitations. The supertoroidal pulse has increasingly complex fractal-like toroidal topological structures, exhibiting electromagnetic field configurations with matryoshka-like singular shells, skyrmionic structures of various skyrmion numbers, and multiple singularities in the Poynting vector field accompanied by multi-layer energy backflow effects. And the topological complexity can be controlled by increasing a supertoroidal order of the pulse increases.

These results put forward supertoroidal pulses as a playground for the study of topological field configurations and their dynamics. The topological features of the supertoroidal pulses presented here provide additional degrees of freedom that could find applications in a number of fields, such as information encoding/decoding schemes involving structured light, optical trapping, manufacturing by light, and particle acceleration. “We believe this is the first time that the skyrmionic structure is proposed in ultrafast structured pulses, and the multiple skyrmionic structure with various textures exist in the instantaneous electromagnetic field of a supertoroidal pulse. Such photonics skyrmionic structures harness intriguing sharp spatial features, promising the potential applications in high-precision metrology and superresolution imaging,” says Dr. Yijie Shen, the lead author of the paper.

This work opens many intriguing opportunities for the study of light-matter interaction, ultrafast optics, and topological optics with supertoroidal light pulses (e.g. coupling to electromagnetic anapoles and localized skyrmions) and their applications in superresolution metrology and imaging, information and energy transfer.

PS5 pre-order deals and price: where to buy PlayStation 5