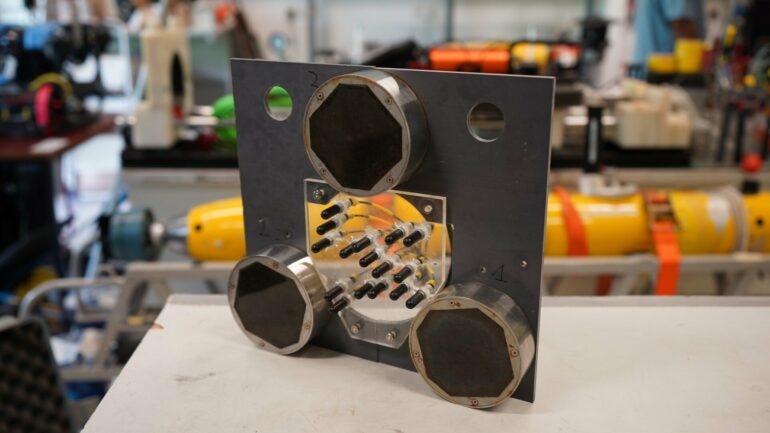 Underwater imaging sonars are an essential technology for ocean exploration. Biomimetic sonars that are inspired from marine mammals such as dolphins are an emerging development in this field. A team of scientists from the National University of Singapore (NUS) Tropical Marine Science Institute (TMSI) has developed a dolphin-inspired compact sonar with a novel echo processing method that allows for clearer visual imaging underwater compared to the conventional signal processing method of visualizing sound echoes.

The sonar incorporates information on the sparsity of objects which helps interpret sound echoes better. This processing method is based on the hypothesis that dolphins use prior information about their environment, apart from broadband sound pulses, to interpret their echoes.

Compared to other sonars of similar sizes and purposes, the sonar developed by the NUS team provides a better trade-off between sonar-image clarity, the number of sensors and the size of the sensor array used. Conventional methods of processing sound echoes usually break down when sensors are too few or spread out. However, the sonar processing method developed by the NUS researchers will be able to extract information and still yield image clarity in such a scenario.

The study was published in Communications Engineering in 2022.

The scientists observed that dolphins were able to acoustically scan objects underwater and pick matching objects visually. This demonstrated that a dolphin’s sound echoes emitted off an object contained information of the object’s shape. They then recorded dolphin echoes emitted when scanning an object underwater.

Based on their observations, the team built a biomimetic sonar that replicated a dolphin’s sonar. The sonar, which is about 25 cm in width and around the size of a dolphin’s head, is designed to emit sharp, impulsive click sounds similar to a dolphin’s echolocation. Three transmitters are used to send sounds from different directions. The researchers then processed the sounds from both the dolphin and their sonar to visualize what the echoes revealed about the object shape.

To complement the hardware, the team came up with an innovative software that allowed the sonar to improve the visualization of the echoes. Based on the hypothesis that dolphins use prior information to process their echoes, the researchers incorporated the concept of sparsity into the sonar’s software. This assumes that out of the space scanned, only a small percentage is occupied by the object.

“Using prior information, such as the idea of sparsity, is intuitive. It is something humans do all the time—we turn our understanding of reality into expectations that can speed up our inferences and decisions. For example, in the absence of other information, the human brain and vision system tend to assume that in an image, the light on an object will be falling from above,” said Dr. Hari Vishnu, senior research fellow at NUS TMSI.

The effectiveness of the software was demonstrated when it was able to visualize information from a dolphin’s sonar echoes when scanning an object, as well as sonar signals produced by their compact sonar. A conventional approach of processing both sonar echoes resulted in noisy images. However, the novel processing approach gave better resolution and therefore sharper images. The software is also able to generate visualizations with a mere three clicks from the sonar, thus allowing it to be operationally fast.

The new sonar processing method could have potential benefits in underwater commercial or military sonars. For example, it could be used to scan the seabed to search for features that can be used to aid navigation. The sonar’s compactness also makes it suitable to be mounted on underwater robots for ocean exploration.