From tracking moods to putting on a show, it’s AI-everything at CES 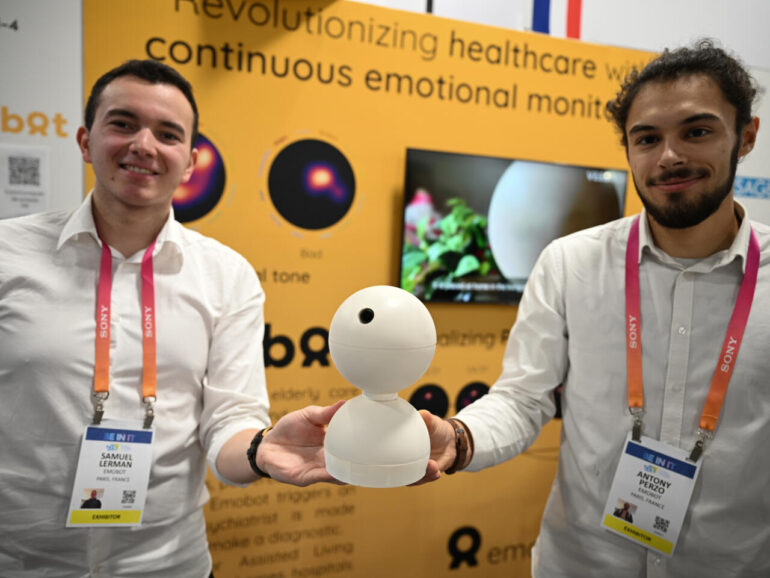 Entrepreneur Antony Perzo introduces a small device called Emobot, which looks like a cross between a speaker and a piece of abstract art, and explains: “It’s an emotional thermometer!”

Like hundreds of other exhibitors at CES, the world’s biggest tech expo, French engineer Perzo is selling the merits of an object that depends on the latest breakthroughs in artificial intelligence.

AI is the big buzzword at the Las Vegas tech extravaganza, with companies big and small unveiling anything from TVs to toothbrushes that depend on big data and connected computing to impress.

Perzo’s Emobot, shown in a corner of Sin City’s Venetian hotel, is used to detect possible psychiatric disorders in the elderly and could help caregivers in nursing homes adjust treatment without waiting for the psychiatrist.

The technology can “analyze micro facial expressions” that reflect human emotions, themselves a magnifier of our “psychological and psychiatric state,” said the engineer.

Nufa, another startup, defines itself as a “pioneer in body transformation through AI.”

The mobile app allows users to edit a photo to see themselves with a slim and athletic body, and motivate themselves to follow a 90-day plan to achieve this result “in real life.”

In Last Vegas, AI-powered gadgets cram the hallways—there are AI bird feeders, baby carriages or fatigue-fighting wristwatches -– to the point that some wonder if the phenomenon is being oversold.

The technology “is used in smartphone cameras, in factories to spot defective products, in agriculture to identify weeds and spray them with weed killer. AI is here to stay,” he said.

Using AI to explore emotions is also the ambition of Emil Jimenez, who founded MindBank Ai in a “quest for immortality… so my daughter could always ask her daddy a question.”

His app asks users to record their answers to deeply personal questions (“What does love mean to you?”) in order to “save your mind forever on the cloud” by creating a personal digital twin.

The user asks it a question—for example, “Is this a good time to buy an apartment?” or “Should underage criminals go to jail?”—and the program scans social networks like Twitter and Instagram to survey public opinion on a large scale.

The biggest AI headlines lately have been on algorithms that make it possible to create original content at the click of a mouse.

California-based company OpenAI has impressed with ChatGPT, an easy to use software that generates a poem or school essay in seconds, and DALL-E which creates visual art.

In a similar way, French start-up Imki has designed a sound and light show for an ancient Roman theater in southern France using similar programs.

While he sees AI as a tool for artists, Saket Dandotia, director of operations at Magnifi, admitted that so-called generative AI represented a threat to the designers it will replace, much like robots in factories.

His team created Strobe, an automated video software. “For us, AI is a huge opportunity, which will transform the entire creative design industry,” he said

Citation:
From tracking moods to putting on a show, it’s AI-everything at CES (2023, January 5)