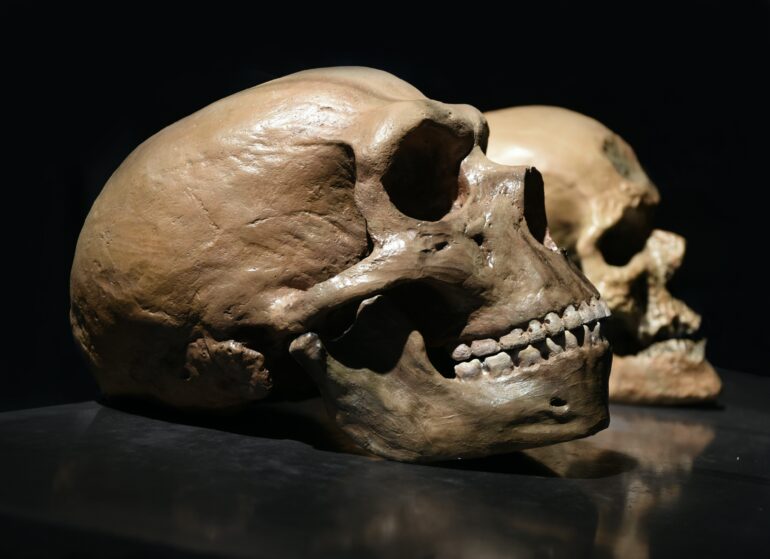 Many believe our particularly large brain is what makes us human—but is there more to it? The brain’s shape, as well as the shapes of its component parts (lobes) may also be important.

Results of a study we published today in Nature Ecology & Evolution show that the way the different parts of the human brain evolved separates us from our primate relatives. In a sense, our brains never grow up. We share this “Peter Pan syndrome” with only one other primate—the Neanderthals.

Our findings provide insight into what makes us human, but also further narrow any distinction between ourselves and our extinct, heavy-browed cousins.

Tracking the evolution of the brain

Mammalian brains have four distinct regions or lobes, each with particular functions. The frontal lobe is associated with reasoning and abstract thought, the temporal lobe with preserving memory, the occipital lobe with vision, and the parietal lobe helps to integrate sensory inputs.

We investigated whether the brain’s lobes evolved independently of each other, or whether evolutionary change in any one lobe appears to be necessarily tied to changes in others—that is, evidence the evolution of the lobes is “integrated.”

In particular, we wanted to know how human brains might differ from other primates in this respect.

Alternatively, we can measure the degree to which the brain’s lobes are integrated with each other as an animal grows through different stages of its life cycle.

Does a shape change in one part of the growing brain correlate with change in other parts? This can be informative because evolutionary steps can often be retraced through an animal’s development. A common example is the brief appearance of gill slits in early human embryos, reflecting the fact we can trace our evolution back to fish.

We used both methods. Our first analysis included 3D brain models of hundreds of living and fossil primates (monkeys and apes, as well as humans and our close fossil relatives). This allowed us to map brain evolution over time.

Our other digital brain data set consisted of living ape species and humans at different growth stages, allowing us to chart integration of the brain’s parts in different species as they mature. Our brain models were based on CT scans of skulls. By digitally filling the brain cavities, you can get a good approximation of the brain’s shape.

The results of our analyses surprised us. Tracking change over deep time across dozens of primate species, we found humans had particularly high levels of brain integration, especially between the parietal and frontal lobes.

But we also found we’re not unique. Integration between these lobes was similarly high in Neanderthals too.

Looking at changes in shape through growth revealed that in apes, such as the chimpanzee, integration between the brain’s lobes is comparable to that of humans until they reach adolescence.

At this point, integration rapidly falls away in the apes, but continues well into adulthood in humans.

So what does this all mean? Our result suggest what distinguishes us from other primates is not just that our brains are bigger. The evolution of the different parts of our brain is more deeply integrated, and, unlike any other living primate, we retain this right through into adult life.

A greater capacity for learning is typically associated with juvenile life stages. We suggest this Peter Pan syndrome played a powerful role in the evolution of human intelligence.

From the oilfield to the lab: How a special microbe turns oil into gases

Archaeological findings continue to mount support for their development of sophisticated technologies, from the earliest known evidence of string, to the manufacture of tar. Neanderthal cave art shows they indulged in complex symbolic thought.

Our results further blur any dividing line between us and them. This said, many remain convinced some innately superior intellectual quality gave us humans a competitive advantage, allowing us to drive our “inferior” cousins to extinction.

There are many reasons why one group of people may dominate, or even eradicate others. Early Western scientists sought to identify cranial features linked to their own “greater intelligence” to explain world domination by Europeans. Of course, we now know skull shape had nothing to do with it.

We humans may ourselves have come perilously close to extinction 70,000 years ago.

If so, it’s not because we weren’t smart. If we had gone extinct, perhaps the descendants of Neanderthals would today be scratching their heads, trying to figure out just how their “superior” brains gave them the edge.