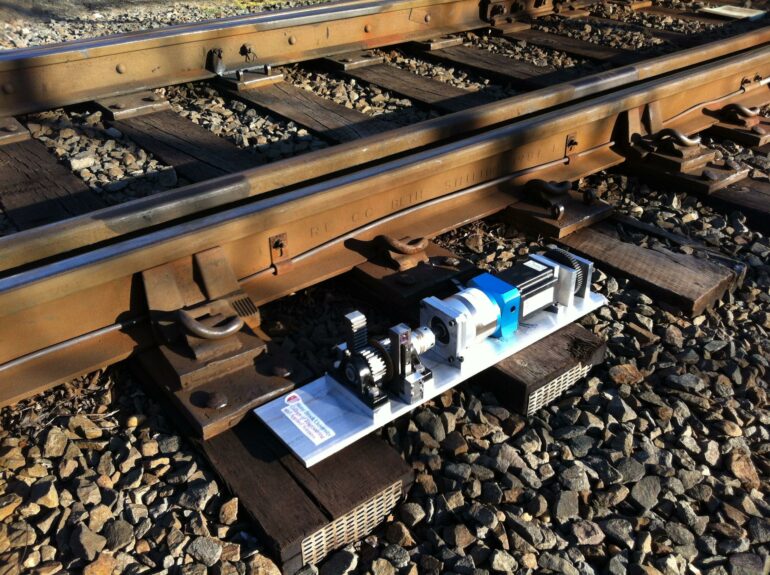 The Virginia Tech Center for Vehicle Systems and Safety (CVeSS) and the Railway Technologies Laboratory want to harness the energy created by moving trains and transform that energy into usable electricity.

Approximately 76% of the total miles on American railroad tracks are in rural areas that lack the electricity required for operating smart rail systems. These smart systems include gear such as wayside safety equipment, wireless communications, and track health monitors. According to CVeSS Director Mehdi Ahmadian, delivering energy to that gear can be challenging. Solar panels are prone to being damaged or stolen, and power generators that use propane require servicing and refueling.

Researchers at CVeSS set about coming up with a more durable solution that would provide energy to these devices, deter theft, and require minimal maintenance.

After several years of design review, CVeSS researchers created a new kind of tie that replaces the conventional wooden variety and is equipped to generate power. Their high-tech tie, placed underneath the rail, is topped with a heavy metal bar mounted on a spring. As the wheels of the train pass over the rail, the train’s weight pushes down on that bar, triggering a series of gears. Those gears rotate a generator, creating electricity, which can then be stored in a battery.

After developing this viable idea, the team next created a prototype. The researchers successfully tested the device in the lab, and Ahmadian started conversations about the technology with familiar industry partners. Norfolk-Southern agreed to host the deployment of the new rail on a section of its track this past August. Since that rollout, the CVeSS team has been collecting data to determine the amount of power that can be generated and the best ways to optimize the device’s design.

A rail with purpose

As trains passed over the rail, researchers got a clearer picture of how much power it might produce and how that power might be put into use.

“For every wheel of the train that goes by, we are harvesting 15 to 20 watts of power,” said Ahmadian. “If we have a long train with maybe 200 railcars, that’s 800 wheels, making 1.6 kilowatts. Once we have stored that energy, we are able to use it to make the tracks more intelligent by embedding sensors in them.”

“The ability to monitor the track with that technology is mostly absent, not because we don’t have the technology, but because it is difficult to bring power to the remote locations where those technologies are needed,” said Ahmadian. “If we remain successful, this promises to be a leap forward for bringing power accessibility to the railroad tracks.”

The research developed for this project was published in Applied Energy and the proceedings of the ASME/ IEEE Joint Rail Conference.