New energy harvesters show potential that fits like a glove 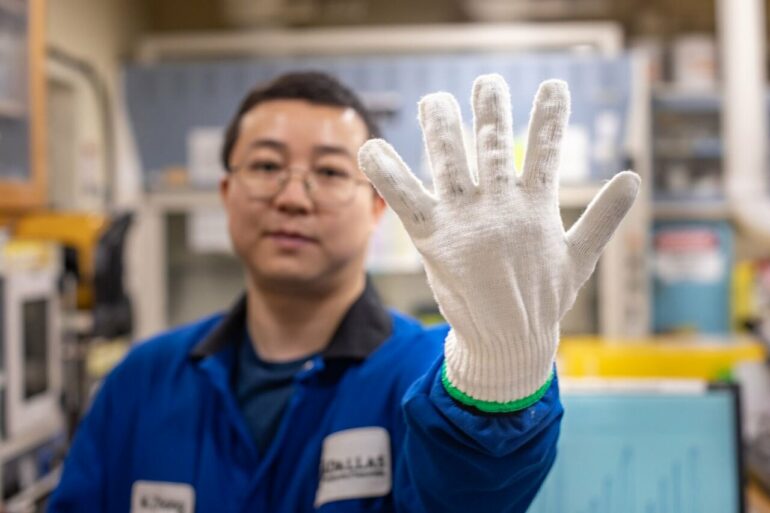 A group of University of Texas at Dallas researchers and their colleagues have made significant improvements to energy-harvesting yarns they invented called twistrons, which are made from carbon nanotubes and produce electricity when repeatedly stretched.

The researchers describe the improved twistrons and some potential applications of the technology in an article published in the July 7 print issue of Advanced Materials.

In a proof-of-principle experiment, Zhong Wang, Ph.D., lead author of the article and a research associate in the Alan G. MacDiarmid NanoTech Institute at UT Dallas, sewed the new twistron yarns into a glove. As someone wearing the glove formed different letters and phrases in American Sign Language, the hand gestures generated electricity.

“Based on the output voltage profiles, we can easily differentiate the finger movement of different letters and phrases, and we can potentially use this glove as a self-powered sign language translator,” said Wang, whose doctoral research at UTD focused on carbon nanotube yarns and energy harvesters. He won the Best Dissertation Award in the School of Natural Sciences and Mathematics in 2022 for this work.

Led by Dr. Ray Baughman, director of the NanoTech Institute and the Robert A. Welch Distinguished Chair in Chemistry, the research group first reported their twistron technology in the journal Science in 2017. Since then, the team has refined the processes they use to make the yarns, and it has resulted in fibers that are more efficient and that produce more electricity per stretching cycle than the previous version.

“Energy harvesting is a critically important area, especially as we look for alternatives to burning fossil fuels. We would like to harvest energy from every available source,” said Baughman, the corresponding author of the latest article.

Some of the potential applications of twistrons include harvesting energy from ocean waves to power sensors or eventually to help power cities, he said, as well as using body movements to power wearable devices.

“If you have a humanoid robot and you want to know which muscles have contracted and if they’re operating correctly, you could incorporate very fine fibers of our twistron harvesters so that when the muscle changes dimensions, it stretches the twistron, which generates electricity,” Baughman said. “That electricity can be measured, which can tell you how much that muscle has changed dimension.”

Twistrons are constructed from carbon nanotubes, which are hollow cylinders of carbon 10,000 times smaller in diameter than a human hair. The nanotubes are twist-spun into high-strength, lightweight yarns. To make the yarns highly elastic, the researchers introduce so much twist that the yarns coil like an overtwisted rubber band.

The Advanced Materials article describes how Wang and his colleagues improved the performance of twistrons by incorporating several innovations into the fabrication process.

“The basic mechanism of these twistrons is that when you stretch them, the bundles of individual carbon nanotubes come in contact with one another, increasing the density of electrons in the material, which increases the voltage output,” Wang said. “Based on this understanding, we found that optimizing the nanotube alignment—the amount of surface area where they interact—can dramatically increase the capacitance change and dramatically increase the voltage output.”

The researchers also incorporated graphene into the manufacturing process. Graphene is a one-atom-thick, 2D sheet of carbon.

“We start by pulling a sheet of carbon nanotubes from a vertically aligned array of nanotubes, called a forest,” Wang said. “In these new experiments, we added a step: We deposited graphene onto that sheet and then twisted and coiled it all together into yarns. This dramatically improved the capacitance change and the amount of electricity we can harvest from the resulting twistrons.”

Stretching the new coiled twistron yarns 30 times a second (30 hertz) generated 3.19 kilowatts per kilogram of peak electrical power, a twelvefold increase over the highest values reported by other researchers for alternative mechanical energy harvesters for frequencies between 0.1 hertz and 600 hertz.

The maximum energy conversion efficiency obtained with the latest twistron version was 7.2 times that of previous twistrons, Baughman said. The researchers have applied for a patent on the technology.

Provided by
University of Texas at Dallas