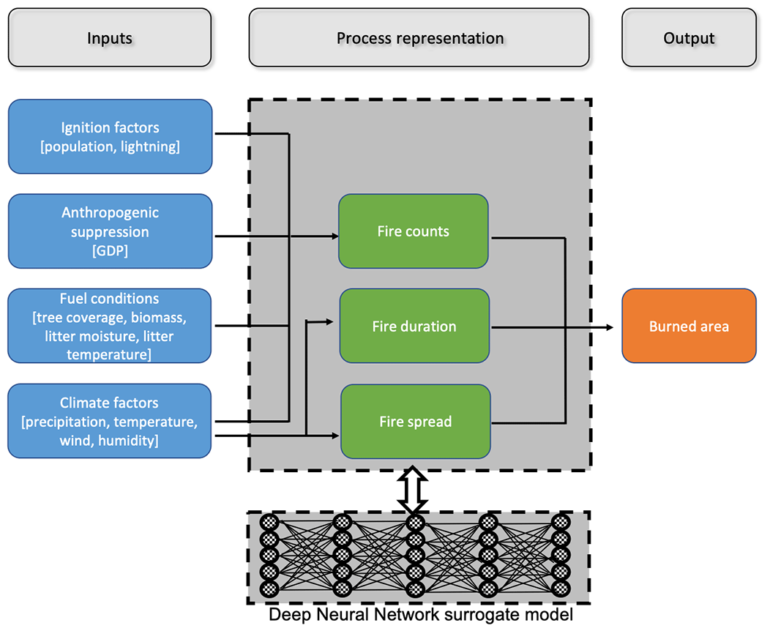 Wildfires are a growing threat in a world shaped by climate change. Now, researchers at Aalto University have developed a neural network model that can accurately predict the occurrence of fires in peatlands. They used the new model to assess the effect of different strategies for managing fire risk and identified a suite of interventions that would reduce fire incidence by 50–76%.

The study focused on the Central Kalimantan province of Borneo in Indonesia, which has the highest density of peatland fires in Southeast Asia. Drainage to support agriculture or residential expansion has made peatlands increasingly vulnerable to recurring fires. In addition to threatening lives and livelihoods, peatland fires release significant amounts of carbon dioxide. However, prevention strategies have faced difficulties because of the lack of clear, quantified links between proposed interventions and fire risk.

The new model uses measurements taken before each fire season in 2002–2019 to predict the distribution of peatland fires. While the findings can be broadly applied to peatlands elsewhere, a new analysis would have to be done for other contexts. “Our methodology could be used for other contexts, but this specific model would have to be re-trained on the new data,” says Alexander Horton, the postdoctoral researcher who carried out study.

The researchers used a convolutional neural network to analyze 31 variables, such as the type of land cover and pre-fire indices of vegetation and drought. Once trained, the network predicted the likelihood of a peatland fire at each spot on the map, producing an expected distribution of fires for the year.

Overall, the neural network’s predictions were correct 80–95% of the time. However, while the model was usually right in predicting a fire, it also missed many fires that actually occurred. About half of the observed fires weren’t predicted by the model, meaning that it isn’t suitable as an early-warning predictive system. Larger groupings of fires tended to be predicted well, while isolated fires were often missed by the network. With further work, the researchers hope to improve the network’s performance so it can also serve as an early-warning system.

The team took advantage of the fact that fire predictions were usually correct to test the effect of different land management strategies. By simulating different interventions, they found that the most effective plausible strategy would be to convert shrubland and scrubland into swamp forests, which would reduce fire incidence by 50%. If this were combined with blocking all of the drainage canals except the major ones, fires would decrease by 70% in total.

However, such a strategy would have clear economic drawbacks. “The local community is in desperate need of long-term, stable cultivation to booster the local economy,” says Horton.

An alternative strategy would be to establish more plantations, since well-managed dramatically reduce the likelihood of fire. However, the plantations are among the key drivers of forest loss, and Horton points out ‘the plantations are mostly owned by larger corporations, often based outside Borneo, which means the profits aren’t directly fed back into the local economy beyond the provision of labor for the local workforce.”

Ultimately, fire prevention strategies have to balance risks, benefits, and costs, and this research provides the information to do that, explains Professor Matti Kummu, who led the study team. “We tried to quantify how the different strategies would work. It’s more about informing policy-makers than providing direct solutions.”

The findings were published in Communications Earth & Environment.

Why some beaches are getting bigger despite rising sea levels