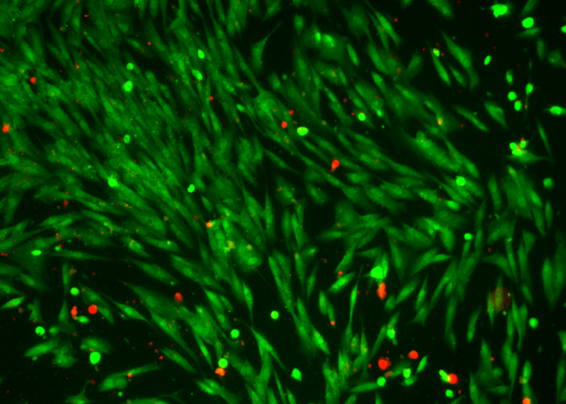 Science fiction novelists couldn’t have come up with a crazier plot: microrobots streaming through blood or through other body fluids that are driven by light, can carry drugs to cancer cells and drop off the medication on the spot. What sounds like a far-fetched fantasy, it is the short summary of a research project now published in Science Robotics. The microswimmers presented in the work could one day perform tasks in living organisms or biological environments that are not easily accessible. Looking even further ahead, the swimmers could perhaps one day treat cancer or other diseases.

In their paper, “Light-driven carbon nitride microswimmers with propulsion in biological and ionic media and responsive on-demand drug delivery,” a team of scientists from the Max Planck Institute for Intelligent Systems (MPI-IS) and its neighboring institute, the Max Planck Institute for Solid State Research (MPI-FKF), demonstrate organic microparticles that can steer through biological fluids and dissolved blood in an unprecedented way. Even in very salty liquids, the microswimmers can be propelled forward at high speed by visible light, either individually or as a swarm. Additionally, they are partially biocompatible and can take up and release cargo on demand. At MPI-IS, scientists from the Physical Intelligence Department led by Metin Sitti were involved and at MPI-FKF, scientists from the Nanochemistry Department led by Bettina Lotsch.

Designing and fabricating such highly advanced microswimmers seemed impossible up until now. Locomotion by light energy is hindered by salts found in water or the body. This requires a sophisticated design that is difficult to scale up. Additionally, controlling the robots from the outside is challenging and often costly. Controlled cargo uptake and on-the-spot delivery is another supreme discipline in the field of nanorobotics.

The scientists used a porous, two-dimensional carbon nitride (CNx) that can be synthesized from organic materials like urea. Like the solar cells of a photovoltaic panel, carbon nitride can absorb light which then provides the energy to propel the robot forward when light illuminates the particle surface.

“The use of light as the energy source of propulsion is very convenient when doing experiments in a petri dish or for applications directly under the skin,” says Filip Podjaski, a group leader in the Nanochemistry Department at MPI-FKF. “There is just one problem: Even tiny concentrations of salts prohibit light-controlled motion. Salts are found in all biological liquids: in blood, cellular fluids, digestive fluids, etc. However, we have shown that our CNx microswimmers function in all biological liquids—even when the concentration of salt ions is very high. This is only possible due to a favorable interplay of different factors: efficient light energy conversion as the driving force, as well as the porous structure of the nanoparticles, which allows ions to flow through them, reducing the resistance created by salt, so to speak. In addition, in this material, light favors the mobility of ions—making the particle even faster.”

Having shown the swimmers are salt-tolerant, the team then tackled the challenge to use them as drug carriers. “This is also possible due to the material’s porosity,” Varun Sridhar explains. He is a postdoctoral researcher at MPI-IS and the first author of the publication. He and his team loaded the small pores of the swimmers with the anti-cancer drug Doxorubicin. “The particles adsorbed the drug like a sponge, up to unprecedentedly high amounts of 185 percent of the carrier mass while staying stably bound to the carbon nitride—even longer than a month. We then showed that controlled release of the drug is possible in a fluid with an acidic pH level. In addition, we were able to illuminate the microswimmers and thus release the drug, regardless of a change in pH. And even when loaded to full capacity, the swimmer did not slow down significantly, which is great.”

The ability to release the drug cargo controlled and efficiently at the desired destination is a challenge. When encountering acidic conditions, such as those found in the stomach, the drug is quickly desorbed in high amounts. However, this typically encountered scenario of drastic pH changes is not found in other parts of the body or in biological environments. Hence, other external release triggers are needed.

“We found that the illumination with blue light, which enables the propulsion, simultaneously releases the carried drug,” Podjaski explains. “This is not always desired for targeted applications, as a release of drugs would occur all the way the particle is propelled. Here, the intrinsic charging capability of our new carbon nitride comes into play: when illuminated in oxygen-depleted (hypoxic) environments, the material can charge up, accumulating the light energy intrinsically, akin to a solar battery we have reported earlier. In such hypoxic conditions, i.e., when the particle becomes charged, the interactions with the adsorbed drugs are modified and the drug release is significantly boosted, enabling an efficient action on cells. Hence, the material’s light charging ability, which is conditioned by hypoxic conditions, suddenly becomes a sensing property for the release.”

The team proved this interaction in an experiment with real tumor cells. In their paper, the scientists show how they illuminated Doxorubicin loaded carbon nitride particles in the vicinity of cancer cells, how the drug is released and taken up by the cells, leading to their decay.

“Our work shows how much unanticipated potential arises from using long known, easily synthesizable, abundant and porous microparticle materials, which are typically designed for applications in photocatalysis, as microrobot materials,” says Metin Sitti.

“The nature of porous organic materials intrinsically enables large inner volumes and surface areas that leave much space for cargo, while overcoming limitations on the propulsion with light, which are otherwise encountered in the presence of ions. Further tailoring of molecular sites could enable more controlled cargo interactions, without any special shape design or employment of encapsulation structures, which are difficult to control. Lastly, the idea of using environmentally sensitive property changes affecting optoelectronic material properties, as given by the intrinsic photo charging abilities of our material, appears to be an efficient pathway to design not only controllable, but also semi-autonomously acting cargo carriers,” says Bettina Lotsch.

Although microswimmers are a vision of the future and will only work under the most optimal conditions, the basic research presented in the study could pave the way toward light-controlled and biocompatible materials, as well as intelligent semi-autonomous systems, with applications also for other technologies. “We hope to inspire many smart minds to find even better ways for controlling microrobots and designing a responsive function to the benefit of our society,” Sitti concludes.