On the way toward CO2-neutral aviation 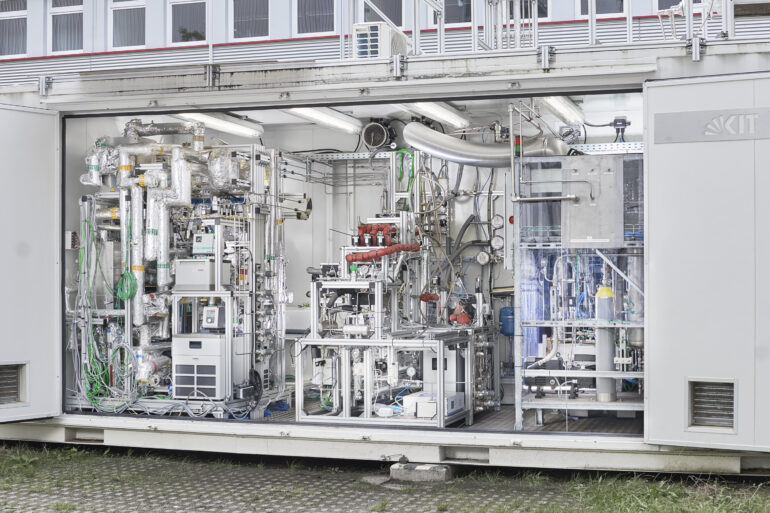 Traveling by airplane without emitting additional CO2—this would be possible with synthetic fuels produced from water and ambient air with the help of renewable energy. However, huge quantities would be required. A new production process developed under the KEROGREEN research project uses an innovative plasma technology to make this possible. The research partners have built a first production facility at Karlsruhe Institute of Technology (KIT).

CO2-neutral air traffic is a big challenge. “Batteries, hydrogen, and hybrid solutions are hardly suited, as their energy densities are too small,” says Professor Peter Pfeifer from KIT’s Institute for Micro Process Engineering. He is one of the spokespersons of the KEROGREEN research project. “Biofuels need cultivation areas and, hence, compete with food production and the preservation of the natural environment.”

To enable CO2-neutral aviation all the same, Pfeifer and the partners of KEROGREEN explored another option: Kerosene from air and water. “When using renewable energy and CO2 directly from the atmosphere, we have a closed carbon loop. We can even continue using the existing infrastructure for storage, transportation, fueling of airplanes, and engine technology.” Moreover, because synthetic green kerosene would not produce any sulfur emissions, soot and nitrogen oxide (NOx) emissions would be reduced.

To produce sufficient kerosene quantities, the KEROGREEN partners have developed a scalable process that is based on an innovative plasma technology and fits into a shipping container. The KEROGREEN had a duration of four and a half years. Work was coordinated by the Dutch Institute for Fundamental Energy Research (DIFFER) in Eindhoven. A research facility was built at KIT. The technology now is in its last phase of system integration. The components have already been connected with each other, while having reached different levels of maturity. “The new production process is very resource-friendly, as no rare resources are needed,” Pfeifer says.

The process consists of three main steps: First, CO2 from ambient air is fed into a reactor in which it is dissociated into carbon monoxide (CO) and oxygen by means of a plasma generated with microwave radiation. Then, oxygen is removed.

In the second reactor, CO is converted into hydrogen by the water gas-shift reaction. This hydrogen and the remaining CO (when combined referred to as synthesis gas) are converted into hydrocarbons by Fischer-Tropsch synthesis in a third reactor. Highly molecular hydrocarbons that cannot be used for the production of kerosene are dissociated internally. In the end, the basic constituent of aviation fuels is obtained. This raw material may then be refined to kerosene or used to store energy.

Ideal for decentralized use with renewable energy

According to the findings obtained by the researchers, facilities up to the megawatt range would be possible with the new plasma technology. But it can also be used in small, decentralized container-sized production facilities.

“Future facilities will be modular and scalable. They can be integrated in an offshore wind park or a solar park in the desert,” Pfeifer says. “If there will be no wind or sun, the plasma reactor will switch off temporarily and start up again when energy will be available.” The project results will now be analyzed thoroughly. Some are already used by industry partners for implementing certain process steps.

No, Apple probably isn’t working on a Nintendo Switch 2 rival

In CompaniesGamingSmartphones
on 10 May 20212 min read