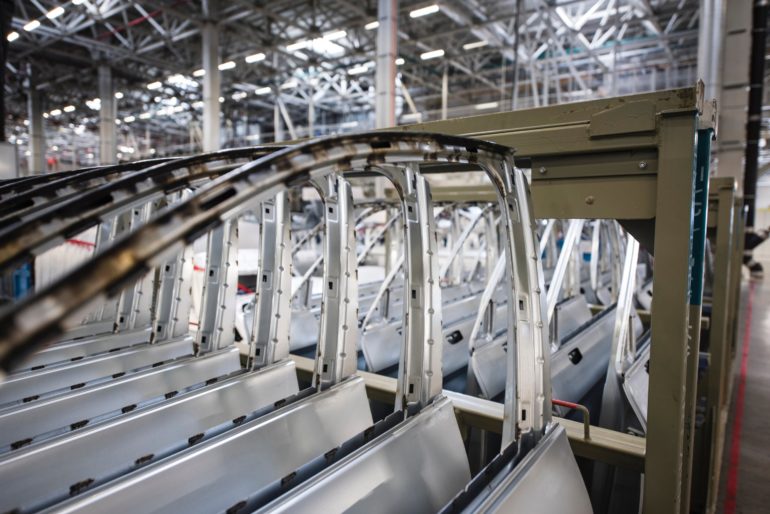 Robots are rapidly making their way into a variety of settings, including industrial and manufacturing facilities. So far, they have shown great potential for speeding up and automating a number of manufacturing processes by substituting or assisting human workers on assembly lines. To be adopted on a large scale, however, robots for manufacturing should be both efficient and relatively affordable.

Researchers at Wuhan University of Science and Technology and University of Leicester have recently developed an optimization technique that could help to optimize the cost and efficiency of multiple robots set to operate in assembly lines. This technique, presented in a paper published in Springer Link’s Neural Computing and Applications journal, is based on a metaheuristic algorithm known as migrating bird optimization algorithm, which is ideal for solving optimization problems due to its simplicity and flexibility in adapting to the nature of a problem.

“Me and my fellow collaborators have been working on robotic assembly line systems for the last few years, as we could see that several industries (especially automotive) are looking at opportunities where they can utilize robot and human workers working in tandem to complete the assembly tasks,” Mukund Janardhanan, one of the researchers who carried out the study, told TechXplore. “However, collaborative working of humans and robots have several challenges.”

The overreaching objective of the recent study by Janardhanan and his colleagues was to optimize assembly lines in which robots and human workers collaborate, ensuring that they can work both effectively and safely. To do this, they developed a multi-objective mixed-integer programming model and used a metaheuristic algorithm. They then tested it on several scenarios in which different types of robots are expected to work together to assemble goods.

“For many industries, purchasing robots will be an expensive affair,” Janardhanan said. “The model developed in this work will help production managers to estimate and optimize the costs involved in the purchase of robots and cycle time simultaneously and this will help them to make decisions while designing or redesigning assembly lines.”

Overall, the migrating bird optimization algorithm was found to achieve remarkable results, which were either better or similar to those achieved by the state-of-the-art techniques it was tested against. In the future, it could be used by manufacturers worldwide to optimize the cost and efficiency of assembly lines, employing a team of robots to support human workers.

“This study was the first to consider simultaneous optimization of purchase costs and cycle time in an assembly line that utilizes both robots and workers in completing the assembly tasks,” Janardhanan said. “In our next studies, we intend to incorporate other objectives such as energy consumption optimization and collaborate with automotive industries to include more realistic factors.”

Microsoft’s PrintNightmare update is causing problems for some printers

Citation:
An algorithm for optimizing the cost and efficiency of human-robot collaborative assembly lines (2021, January 15)
retrieved 15 January 2021
from https://techxplore.com/news/2021-01-algorithm-optimizing-efficiency-human-robot-collaborative.html