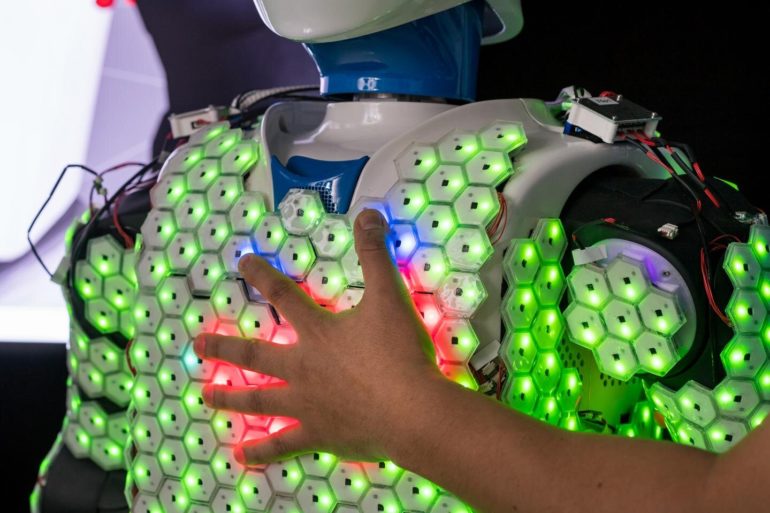 The H-1 humanoid is equipped with 1260 cells (with more than 13000 sensors) on its upper body, arms, legs and even the soles of its feet thanks to the artificial skin. The H-1 can respond to uneven floor surfaces and balance on one leg. Astrid Eckert/TUM

Sensitive synthetic skin enables robots to sense their own bodies and surroundings – a crucial capability if they are to be in close contact with people. Inspired by human skin, a team at the Technical University of Munich (TUM) has developed a system combining artificial skin with control algorithms and used it to create the first autonomous humanoid robot with full-body artificial skin.

The artificial skin developed by Prof. Gordon Cheng and his team consists of hexagonal cells about the size of a two-euro coin (i.e. about one inch in diameter). Each is equipped with a microprocessor and sensors to detect contact, acceleration, proximity and temperature. Such artificial skin enables robots to perceive their surroundings in much greater detail and with more sensitivity. This not only helps them to move safely. It also makes them safer when operating near people and gives them the ability to anticipate and actively avoid accidents.

Mission critical: How to map a forest

The skin cells themselves were developed around 10 years ago by Gordon Cheng, Professor of Cognitive Systems at TUM. But this invention only revealed its full potential when integrated into a sophisticated system as described in the latest issue of the journal “Proceedings of the IEEE.”

The biggest obstacle in developing robot skin has always been computing capacity. Human skin has around 5 million receptors. Efforts to implement continuous processing of data from sensors in…