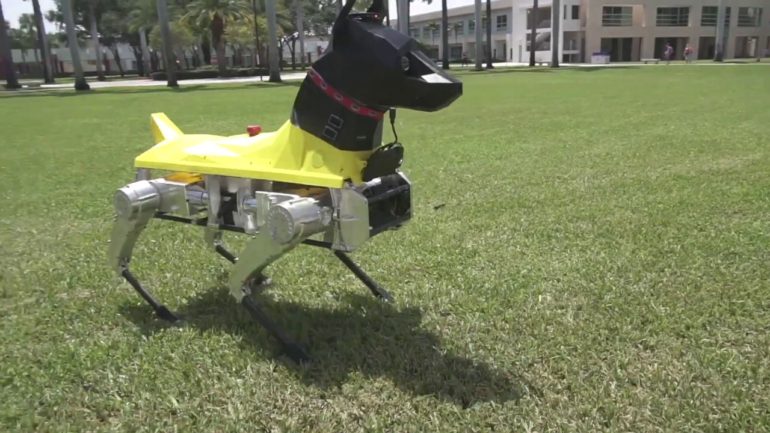 What would you get if you combined Apple’s Siri and Amazon’s Alexa with Boston Dynamic’s quadruped robots? You’d get “Astro,” the four-legged seeing and hearing intelligent robot dog.

Using deep learning and artificial intelligence (AI), scientists from Florida Atlantic University’s Machine Perception and Cognitive Robotics Laboratory (MPCR) in the Center for Complex Systems and Brain Sciences in FAU’s Charles E. Schmidt College of Science are bringing to life one of about a handful of these quadruped robots in the world. Astro is unique because he is the only one of these robots with a head, 3D printed to resemble a Doberman pinscher, that contains a (computerized) brain.

Astro not only looks like a dog; he learns like one too. That’s because he doesn’t operate based on pre-programmed robotic automation. Instead, Astro is being trained using inputs to a deep neural network – a computerized simulation of a brain – so that he can learn from experience to perform human-like tasks, or on his case, “doggie-like” tasks, that benefit humanity.

Equipped with sensors, high-tech radar imaging, cameras and a directional microphone, this 100-pound robot dog is still a “puppy-in-training.” Just like a regular dog, he responds to commands such as “sit,” “stand” and “lie down.” Eventually, he will be able to understand and respond to hand signals, detect different colors, comprehend many languages, coordinate his efforts with drones, distinguish human faces, and even recognize other dogs.

What the robot dog will be used for

As an information scout, Astro’s key missions will include detecting guns, explosives and gun residue to…