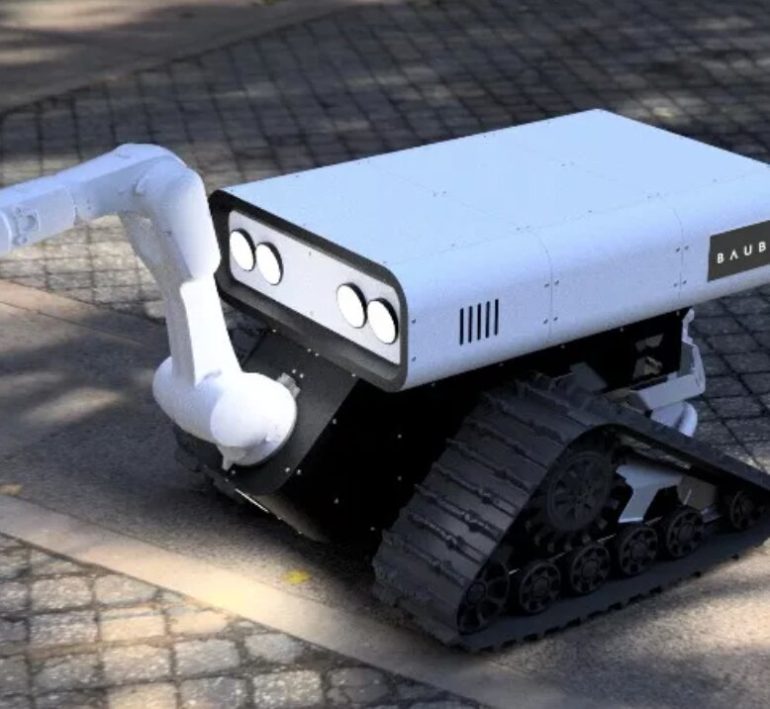 Despite artificial intelligence and robotics adapting to many other areas of life and the work force, construction has long remained dominated by humans in neon caps and vests. Now, the robotics company Baubot has developed a Printstones robot, which they hope to supplement human construction workers onsite.

Baubot manufacturers built this robot with the capacity to transport heavy loads, lay bricks and even sand sheetrock. So far, the Austria-based company has come out with two robots – a smaller prototype with a 40-inch arm and a larger robot with an 82-inch arm.

Users can switch out the type of digits at the end of each arm depending on what type of task they need the bot to perform. For example, an arm tip has the ability to cut, drill, sand and also use a suction feature to elevate heavy rocks into the proper location. Both types of robot can transport over one ton of material.

While both robots are still in pre-production, many human construction workers have already begun to express concern that these machines might replace them in the work they do. Still, the benefit of such developments remains obvious, especially in already-released products such as the SRS100-400 3D printer utilized for construction that sits inside a regular shipping container. In fact, that type of printer has proven successful in a lot of construction projects involving concrete extrusion thus far, before expanding to include drilling, sanding and welding.

Most recently, the business development unit at Baubot has explained that these robots were all built based off of the various operations performed at real construction sites. This way, the machines’ programming and capabilities will reflect all types of work historically carried out by human construction workers and with live construction tools.

All that said, individuals who prefer to take care of their own home construction need not worry about these slowly and likely fragile robots replacing them either in their yard or the typical construction site. However, Baubot manufacturers do intend for these machines to hopefully replace human construction workers at potentially hazardous sites as well as to considerably expedite the building process.

In terms of pricing, the Baubot business unit has stated that cost will depend on the amount of engineering required in manufacturing as well as the application implemented into the robot in question. At this time, the company projects each unit to take roughly six months to ship and to sell at a starting price of 150,000 euros.