Self-transforming robot blocks jump, spin, flip, and identify each other 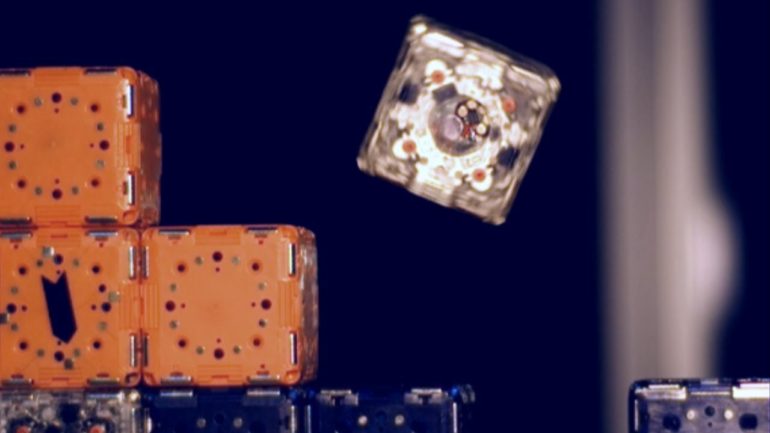 Swarms of simple, interacting robots have the potential to unlock stealthy abilities for accomplishing complex tasks. Getting these robots to achieve a true hive-like mind of coordination, though, has proved to be a hurdle.

In an effort to change this, a team from MIT’s Computer Science and Artificial Intelligence Laboratory (CSAIL) came up with a surprisingly simple scheme: self-assembling robotic cubes that can climb over and around one another, leap through the air, and roll across the ground.

Six years after the project’s first iteration, the robots can now “communicate” with each other using a barcode-like system on each face of the block that allows the modules to identify each other. The autonomous fleet of 16 blocks can now accomplish simple tasks or behaviors, such as forming a line, following arrows, or tracking light.

Inside each modular “M-Block” is a flywheel that moves at 20,000 revolutions per minute, using angular momentum when the flywheel is braked. On each edge and every face are permanent magnets that let any two cubes attach to each other.

While the cubes can’t be manipulated quite as easily as, say, those from the video game “Minecraft,” the team envisions strong applications in inspection, and eventually disaster response. Imagine a burning building where a staircase has disappeared. In the future, you can envision simply throwing M-Blocks on the ground, and watching them build out a temporary staircase for climbing up to the roof, or down to the basement to rescue victims.