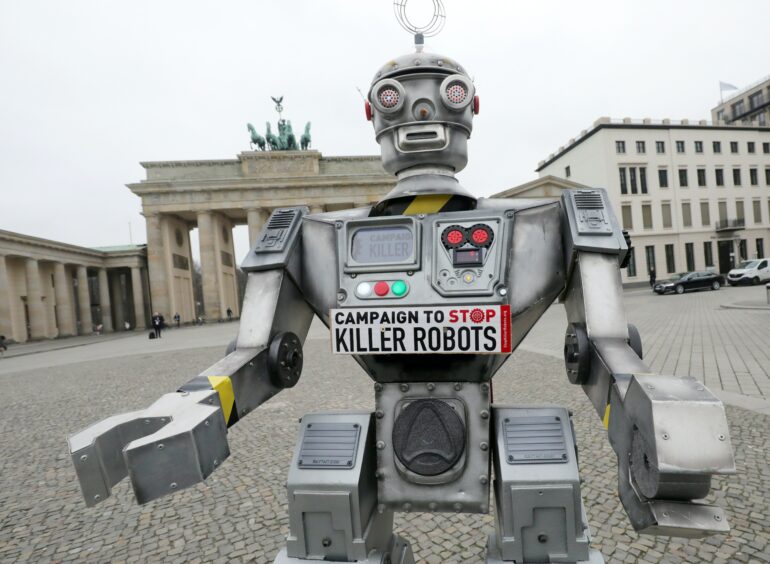 Autonomous weapon systems – commonly known as killer robots – may have killed human beings for the first time ever last year, according to a recent United Nations Security Council report on the Libyan civil war. History could well identify this as the starting point of the next major arms race, one that has the potential to be humanity’s final one.

The United Nations Convention on Certain Conventional Weapons debated the question of banning autonomous weapons at its once-every-five-years review meeting in Geneva Dec. 13-17, 2021, but didn’t reach consensus on a ban. Established in 1983, the convention has been updated regularly to restrict some of the world’s cruelest conventional weapons, including land mines, booby traps and incendiary weapons.

Autonomous weapon systems are robots with lethal weapons that can operate independently, selecting and attacking targets without a human weighing in on those decisions. Militaries around the world are investing heavily in autonomous weapons research and development. The U.S. alone budgeted US$18 billion for autonomous weapons between 2016 and 2020.

Meanwhile, human rights and humanitarian organizations are racing to establish regulations and prohibitions on such weapons development. Without such checks, foreign policy experts warn that disruptive autonomous weapons technologies will dangerously destabilize current nuclear strategies, both because they could radically change perceptions of strategic dominance, increasing the risk of preemptive attacks, and because they could be combined with chemical, biological, radiological and nuclear weapons themselves.

As a specialist in human rights with a focus on the weaponization of artificial intelligence, I find that autonomous weapons make the unsteady balances and fragmented safeguards of the nuclear world – for example, the U.S. president’s minimally constrained authority to launch a strike – more unsteady and more fragmented. Given the pace of research and development in autonomous weapons, the U.N. meeting might have been the last chance to head off an arms race.

I see four primary dangers with autonomous weapons. The first is the problem of misidentification. When selecting a target, will autonomous weapons be able to distinguish between hostile soldiers and 12-year-olds playing with toy guns? Between civilians fleeing a conflict site and insurgents making a tactical retreat?

The ethics of digital technology in the food sector