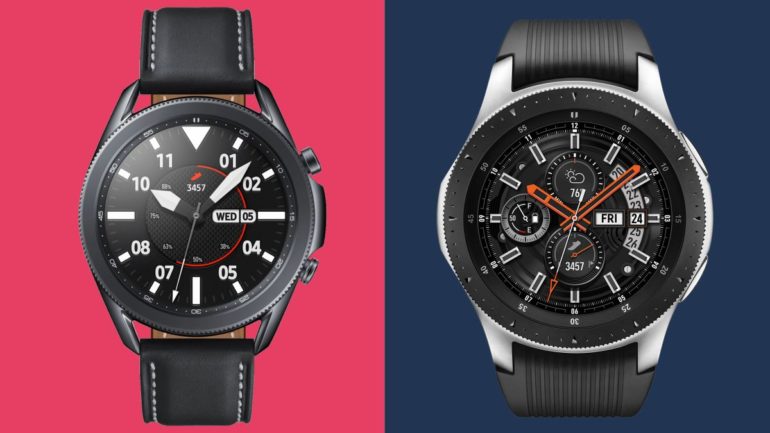 The Galaxy Watch 3 has a leaner design and better specs than its predecessor, which is to be expected, given it landed two years after the original Galaxy Watch came out in August 2018. It also has more health and workout features, an ECG, SpO2 blood oxygen monitoring, and blood pressure tracking.

The real question is whether there’s been enough improvement to warrant the newer smartwatch’s high price, or if consumers should be satisfied with the reliable (and discounted) original Galaxy Watch. We don’t have an easy answer, unless you’re very budget-conscious – in which case, the new watch likely isn’t worth it.

But if you’re looking to replace an aging watch or are just curious how the old and new Galaxy Watches stack up, read on for our category breakdowns. We’re also rounding up the latest smartwatch sales if you’re looking for more options.

The Samsung Galaxy Watch 3 was announced on August 5, 2020 and became available a day later on August 6 in the US, UK and other ‘select countries’.

These are available in Mystic Bronze, Mystic Black, and Mystic White colors with leather straps. The watch also comes in titanium in a single color (Mystic Black) with a metal strap.

The original Galaxy Watch came in Midnight Black and Rose Gold for the smaller 42mm size, and a single Silver color for the larger 46mm model.

At this point, both the Galaxy Watch 3 and the original Galaxy Watch can be found for less than those prices, but the older model has dropped substantially further.

The Galaxy Watch 3 is a sleeker version of its predecessor, coming in 14% thinner and 15% lighter than the original Galaxy Watch, but most of the change is in the appearance: it simply looks less bulky than the older wearable.

Specifically, the lugs (the arms connecting the watch’s case to the band) are thinner, with open space around the watch band strap’s bar. There are other touches that make the watch look leaner – for instance, the cylindrical side buttons are more pronounced, jutting out rather than lining up flush with the edge of the case, as the original Galaxy Watch’s buttons did.

Some of these changes make the Galaxy Watch 3 simply look classier. The switch from a rubberized strap to a leather band is an obvious one, but the rotating bezel no longer has the triangle pips aligned with the inner bezel’s time intervals for an overall more minimal look. Not everything has changed, thankfully – the bezel still physically rotates, which was one of our favorite features in the original.

And the original Galaxy Watch remains an attractive device, though it looks a bit chunkier in comparison. Its lugs jut out a bit longer than its successor’s, but the 12.7mm and 13mm thicknesses for the 42mm and 46mm versions are bigger than the 11.3mm and 11.1mm thicknesses of the 41mm and 45mm versions of the newer Galaxy Watch 3 (not a typo, the larger watch is thinner, somehow).

And while the smaller versions of both watches weigh about the same (49g), the larger versions packing more battery have the biggest disparity in weight: the 46mm original Galaxy Watch weighs 63g, while the 45mm Galaxy Watch 3 weighs just over 53g. And if you pony up for the 45mm titanium model, expect a relatively featherweight 43g.

Otherwise, both watches’ displays are full-color, always-on Super AMOLED with a 360 x 360 resolution.

The big addition to the Galaxy Watch 3 is its SpO2 monitor, which tracks the oxygen levels in blood. That’s a feature found in the Apple Watch 6 and the Withings ScanWatch, which enhances sleep tracking. The Watch 3 also adds an electrocardiogram (ECG) app and has blood pressure monitoring.

Those last two features require medical certification in every region the Watch 3 is released – which means these features won’t necessarily be available everywhere yet, though at the time of writing they’re available in much of the world.

Beyond that, the Watch 3 inherits most of the original Galaxy Watch’s fitness software, but it adds seven new workout activities for a total of 40. The Watch 3 also adds the capability to activate workouts by voice as well as cast the Samsung Health app to Samsung TVs.

Training mode allows you to customize which metrics you’d like to display as complications, from VO2 to balance and stride. Samsung also consulted with the National Sleep Institute to improve the sleep tracking feature, which automatically tracks your sleep cycle and gives a report on sleep quality in the morning.

The Galaxy Watch 3 packs the same Exynos 9110 chipset as the original Galaxy Watch – the improvements lie in the newer smartwatch’s 8GB of storage, which is double its predecessor’s 4GB. That’s more room for media and apps.

The Samsung Galaxy Watch 3 also packs 1GB of RAM, which is more than the original Galaxy Watch’s 42mm version (768MB RAM) but less than the 46mm model (1.5GB RAM). That’s not exactly worrying: the Apple Watch 6 runs on 1GB of RAM.

Battery is where the Galaxy Watch 3 slightly loses pace with its predecessor. The capacity for the larger 45mm version of the newer smartwatch is 340mAh, while the 46mm Galaxy Watch packed a whopping 472mAh that lasted over three days without recharging in our testing. We found the Galaxy Watch 3 would last two to three days though, so it’s only slightly behind here.

We’re consciously comparing the larger models of both watches, which have noticeably more capacity than the smaller versions: for instance, the 41mm model of the Samsung Galaxy Watch 3 has a 247mAh battery, while the 42mm version of the original Galaxy Watch has a 270mAh battery.

The original Galaxy Watch drops to around two days of life if you opt for the smaller model, and while we haven’t extensively tested the smaller Galaxy Watch 3, we’d expect a similar drop there.

It’s hard not to like the Samsung Galaxy Watch 3, with its leading specs and cleaner look over the original Galaxy Watch. It’s also noticeably lighter, which is an unsung quality in a watch you might use casually and in workouts.

But do these improvements warrant the increased price? That’s up to the consumer, as the newer Galaxy Watch 3 does have certain perks – ECG, SpO2 tracking, improved fitness – that might be worth the cost.

For those who want a sturdy smartwatch to pair with their Android phone for basic tracking and tasks, it’s hard to see the Galaxy Watch 3 being worth the extra expense. And if you want the best Galaxy Watch possible then you might want to hold out for the Galaxy Watch 4, which is expected soon.

Still, until that lands the Samsung Galaxy Watch 3 is the best Samsung smartwatch you can buy, and one of the best from any brand, it’s just not a huge upgrade on its predecessor.