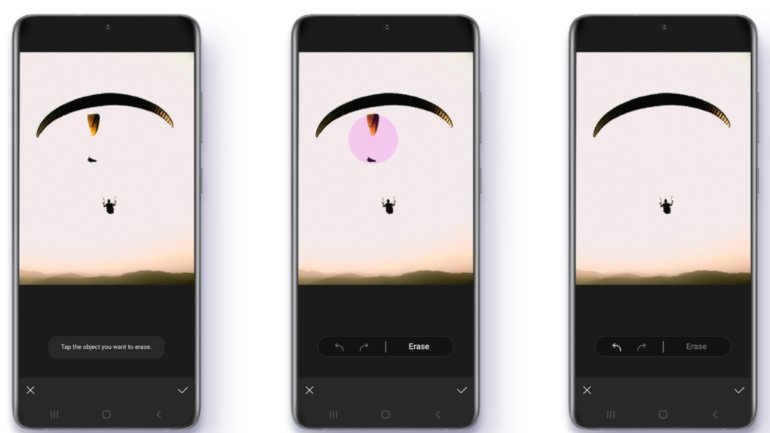 TM Roh, President and Head of Mobile Communications Business, Samsung Electronics, said: “Following the announcement of 3-generation Android OS upgrades for select Galaxy devices, we ensure to equip our consumers with powerful new features as soon as they are available. Our One UI 3.1 update marks an important next step in that mission.”

Enhanced features for your photos

Among the interesting features are the improved Single Take feature, which captures a variety of still and video formats simultaneously, with just a tap.

This feature allows you to pick the best shot from a bunch, but also lets you to work in video effects.

Also, the erase feature in photos will be a good attraction. Once you’ve captured your shot, the new Object eraser tool will help you to cut out unwanted parts of your photos effortlessly, without time-consuming manual editing. If you want to edit out distracting objects, simply tap the area you wish to remove and it will be automatically selected and deleted.

Further, there is improved touch autofocus and autoexposure controller that helps in making adjusting the focus and brightness of your photos easier than ever. With just a swipe left or right anywhere on the screen, you can now edit the brightness of your image before you’ve taken the shot.

One UI 3.1 also has the new Multi Mic Recording feature, which, when in Pro Video mode, allows you to simultaneously record audio through both your phone and a connected Bluetooth device such as Galaxy Buds Pro, Buds Live and Buds+ 5.

“So whether you’re a vlogger, narrating a shot where you want to be heard from afar, or you’re a budding musician wanting to record the sound of your voice and instrument separately for more professional-sounding audio, with Multi Mic Recording you can get creative and make videos that look and sound incredible,” Samsung said.

The update also makes it easier to control what you share. You can remove metadata that reveals the location of photos before you share them or use Private Share to control who is allowed access to the content you send, and how long it is available.

It is not clear as to which regions are getting the update that are set to rollout from tonight.