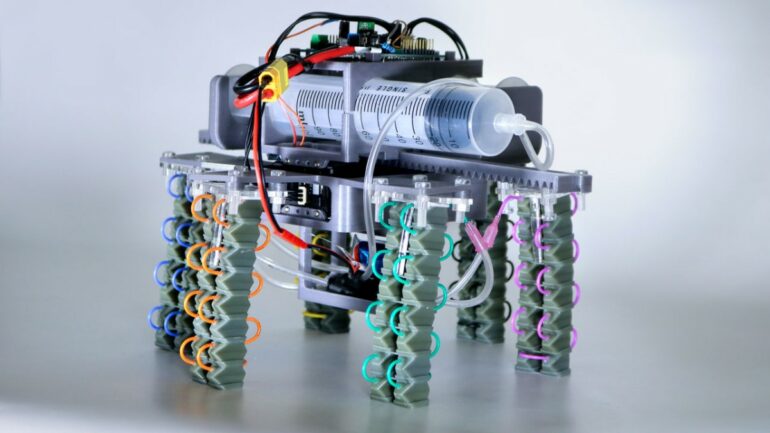 One of the virtues of untethered soft robots is their ability to mechanically adapt to their surroundings and tasks, making them ideal for a range of roles, from tightening bolts in a factory to conducting deep-sea exploration. Now they are poised to become even more agile and controlled.

A team of researchers led by Kirstin Petersen, assistant professor of electrical and computer engineering in the College of Engineering, designed a new—and surprisingly simple—system of fluid-driven actuators that enable soft robots to achieve more complex motions. The researchers accomplished this by taking advantage of the very thing—viscosity—that had previously stymied the movement of such robots.

Petersen’s Collective Embodied Intelligence Lab has been exploring ways to take a robot’s cognitive capabilities and behaviors and offload them from the “brain” onto the body, via the robot’s mechanical reflexes and ability to leverage its environment. By reducing the need for explicit computation, the robot can become simpler, more robust and less expensive to manufacture.

“Soft robots have a very simple structure, but can have much more flexible functionality than their rigid cousins. They’re sort of the ultimate embodied intelligent robot,” Petersen said. “Most soft robots these days are fluid-driven. In the past, most people have looked at how we could get extra bang for our bucks by embedding functionality into the robot material, like the elastomer. Instead, we asked ourselves how we could do more with less by utilizing how the fluid interacts with that material.”

Traditionally, a soft robot’s fluid-driven actuator—i.e., the part the moves, such as a limb—functions when evenly pressurized fluid flows through an elastomer bladder or bellow. This forces the actuator, which has been mechanically designed to bend in a predetermined direction, to move as told. The main sticking point is if the actuator’s internal flow is viscous, pressure equalizes differently, causing the actuator’s movement to become sluggish and the robot to slow down.

Petersen’s team started from a similar template, except they connected a series of elastomer bellows with slender tubes, running in a pair of parallel columns, all in a closed system. This configuration allows for antagonistic motions—one that pulls and one that pushes. The tiny tubes induce viscosity, which causes the pressure to be distributed unevenly, bending the actuator into different contortions and motion patterns. That would normally be a problem, but the team found a clever way to take advantage of it.

Matia developed a full descriptive model that could predict the actuator’s possible motions and anticipate how different input pressures, geometries, and tube and bellow configurations achieve them—all with a single fluid input. That results in an actuator that can achieve far more complex motions, but without the multiple inputs and complex feedback control that previous methods required.

“The role of today’s inert structural materials will be very different in our future machines,” Matia said. “It lies in embedding agency and computation into materials—organic to the material, the manufacturing process and the physical phenomenon governing the system—allowing them to act independently through physical mechanisms and internal architecture. This work represents a novel scalable framework to manifest control of the material by the material, where otherwise inert structural matter acts on their own behalf.”

To demonstrate the technology, the team built a six-legged soft robot, with two syringe pumps on top, that walks at 0.05 body lengths per second, and crouches as well. But those are only the beginning of the possible permutations.

“We detailed the full complement of methods by which you can design these actuators for future applications,” Petersen said. “For example, when the actuators are used as legs, we show that just by crossing over one set of tubes, you can go from an ostrich-like gait, that has a really wide stance, to an elephant-like trot.”

The new fluid-driven actuator could be used for different types of devices, such as robot arms, and Petersen is interested in exploring how placing bellows in 3D configurations will result in even more useful motion patterns.

“This is basically a whole new subfield of soft robotics,” she said. “Exploring that space will be super interesting.”