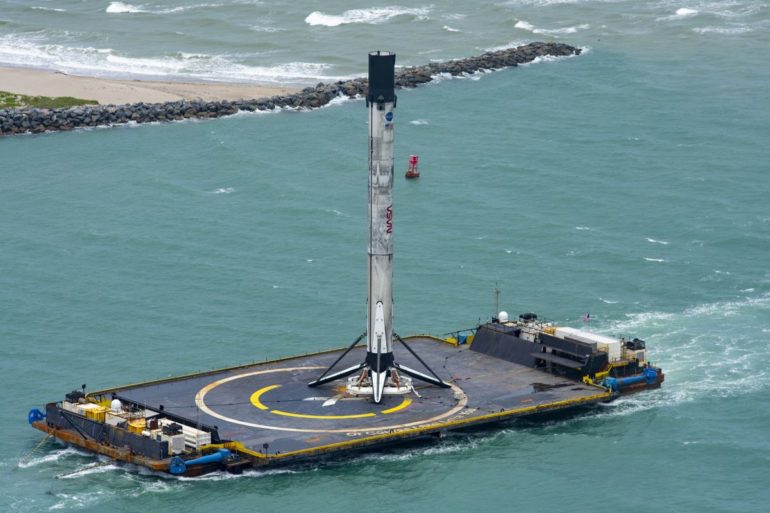 The rocket that launched SpaceX’s first-ever crewed mission has returned to terra firma.

That mission, called Demo-2, lifted off atop a two-stage Falcon 9 rocket on Saturday (May 30) from NASA’s Kennedy Space Center in Florida, sending NASA astronauts Bob Behnken and Doug Hurley toward the International Space Station (ISS) aboard a Crew Dragon capsule.

About 9 minutes after liftoff, the Falcon 9 first stage aced a pinpoint landing on the SpaceX drone ship “Of Course I Still Love You,” which was stationed a few hundred miles off the Florida coast. The ship soon started heading back toward shore, and on Tuesday (June 2) its sea voyage came to an end: “Of Course I Still Love You,” with the rocket secured to its deck, arrived at Florida’s Port Canaveral, SpaceX announced via Twitter.

SpaceX commonly refurbishes and reflies Falcon 9 first stages, as well as the first stages of the company’s Falcon Heavy megarocket. Such reuse is a key priority of SpaceX founder and CEO Elon Musk, who wants to cut the cost of spaceflight dramatically enough to enable a variety of ambitious exploration feats — especially the colonization of Mars. (The one-engine Falcon 9 second stage remains expendable at the moment, but it’s not nearly as expensive as the nine-engine first stage.)

In AICompaniesSmartphones
on 15 January 20212 min read

After launching @AstroBehnken and @Astro_Doug to orbit on Crew Dragon, Falcon 9 landed on the Of Course I Still Love You droneship and returned to Port Canaveral pic.twitter.com/ACov1BhgXYJune 2, 2020

We perhaps cannot assume that this…