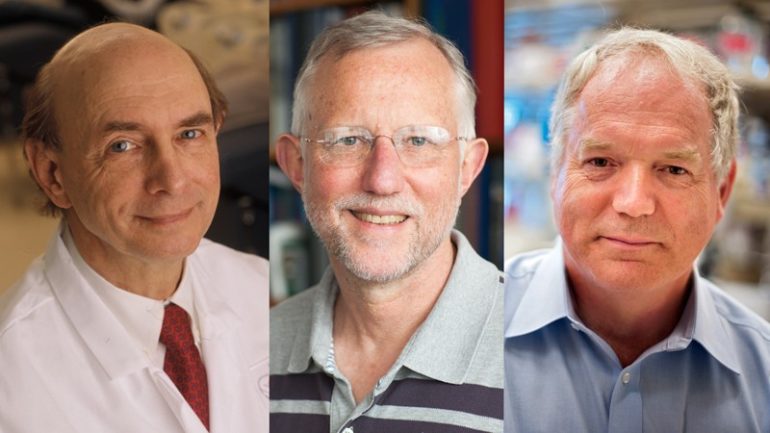 A trio of scientists who identified and characterized the virus responsible for many cases of hepatitis and liver disease — hepatitis C — are the recipients of the 2020 Nobel Prize in Physiology or Medicine.

The winners are Harvey Alter at the US National Institutes of Health in Bethesda, Maryland; Michael Houghton, now at the University of Alberta in Canada; and Charles Rice, now at Rockefeller University in New York City. Their work on the hepatitis C virus paved the way for effective treatments against the infection that are now available.

The World Health Organization (WHO) estimates that 71 million people worldwide are chronically infected with hepatitis C, which causes nearly 400,000 deaths per year, mostly from cirrhosis and liver cancer.

The prize is well deserved, says Ellie Barnes, who studies liver medicine and immunology at the University of Oxford, UK. “It stands out as an emblem of great science,” she says. “We’ve got to a point where we can cure most people who are infected.” The prizewinners will share an award of 10 million kronor (US$1.1 million).

In the 1970s, Alter studied the transmission of hepatitis, or liver inflammation, as a result of blood transfusions. Earlier work had identified hepatitis A and B viruses, but Alter showed that a third, blood-borne viral pathogen could transmit the disease to chimpanzees.

Houghton, then working at Chiron Corporation in Emeryville, California, and his colleagues identified the virus on the basis of genetic material from infected chimpanzees, showing that it was a new kind of RNA virus that belonged to the Flavivirus family. They named it hepatitis C virus.

A team led by Rice, then based at Washington University in St. Louis, Missouri, used genetic-engineering techniques to characterize a portion of the hepatitis C genome responsible for viral replication, demonstrating its role in causing liver disease.

At a press conference, Alter noted that it took researchers at Chiron six years to clone a tiny fragment of the hepatitis C viral genome, and expressed doubt about whether such painstaking research could be carried out today. “Nowadays if you don’t have an immediate endpoint it’s hard to get funding,” he said. “It’s much more difficult for people now — especially young people — to pursue research. I think the dynamic has to change a little bit.”

Some researchers had considered virologist Ralf Bartenschlager at the University of Heidelberg in Germany a candidate for a Nobel prize for hepatitis C, because of his research into ways of propagating the pathogen in the laboratory. But Bartenschlager says that the Nobel committee made a reasonable choice. “It’s a really difficult decision,” he says. “I think the way they have approached it is fairly well understandable.”

In the past, Houghton has been a vocal critic of scientific prizes that limit the number of recipients; the maximum number of awardees for a single Nobel prize is three. In 2013, he declined the prestigious Canada Gairdner Award — which came with a Can$100,000 (US$75,000) prize — because the award did not recognize his collaborators Qui-Lim Choo and George Kuo at Chiron. “He always wants to see his discovery as a team approach,” says Thomas Baumert, a virologist and hepatologist at the University of Strasbourg in France.

Houghton says that he had hoped to convince the Gairdner Foundation to expand the prize list to include his collaborators. But discussions with the foundation became heated, and Houghton decided that he did not want the prize. The Nobel prize, he says, is a different matter. “I think it would be really too presumptuous of me to turn down a Nobel,” he said during a press conference. “Their regulations and their processes are based on Alfred Nobel’s will, and I don’t think it’s feasible to discuss that kind of thing with them.”

The results of research by the prizewinners and others has led to significant improvements in hepatitis testing and treatment. In the past decade, harsh and poorly effective treatments for the infection have been replaced by drugs that directly block the virus. These medicines have the potential to cure the vast majority of hepatitis C infections, but their high cost has limited access in many low- and middle-income countries.

Treatment requires following a drug regimen for 8–12 weeks, says Barnes. “Many of the people living with hepatitis C remain in vulnerable settings or are i.v. drug users, where it’s actually quite hard to get the drugs to the people affected.”

Bartenschlager says that he hopes the Nobel will bring attention to the “silent epidemic” of hepatitis C around the world.

The WHO has set a goal of eradicating the hepatitis C virus by 2030, which Barnes says could be achievable. But to do so, she adds, might require a vaccine.

Progress on developing such a vaccine has been slow, owing in part to poor investment in the effort, and to the wily nature of the virus itself. The genetics of each strain of hepatitis C virus differ drastically: Barnes estimates that hepatitis C is ten times more diverse than HIV, and “infinitely” more so than the SARS-CoV-2 coronavirus, which causes COVID-19. And it is difficult to conduct clinical trials in the populations most vulnerable to the hepatitis C virus.

None of these problems is insurmountable, Barnes says. “The virus was discovered 30 years ago and we still don’t have a vaccine,” she adds. “We still have people infected and dying of hepatitis C. From that point of view, the story’s not over.”

Baumert adds that the availability of improved treatments has brought a misconception that the hepatitis C problem has been solved, and funders and journals seem less interested in the disease. The Nobel prize could be an opportunity to remind the world that hepatitis C remains a problem. “This will boost it back and put the focus back on the vaccine,” he says.