WeWork to go public via SPAC deal, aims to be part of future of work

How to get remote work right

In this special feature, ZDNet helps enterprises and SMBs alike navigate the technical and management challenges of a remote workforce.

The future of work will apparently include WeWork, which will go public via a merger with BowX Acquisition Corp., a special purpose acquisition company.

Multiple companies have gone public via SPACs, but WeWork was just recently a big investment loss for SoftBank. WeWork did see increased demand for flexible office space in the COVID-19 pandemic.

The deal with BowX values WeWork at about $9 billion. The transaction will give WeWork about $1.3 billion in cash. BowX will provide $483 million in cash in a trust and Insight Partners, Starwood Capital, Fidelity and Centaurus Capital are providing $800 million in a private placement.

Sandeep Mathrani, CEO of WeWork, said the company has transformed over the last year “while simultaneously managing and innovating through a historic downturn.”

If successful, WeWork will be quite the comeback story.

WeWork’s plan revolves around digitizing real estate with space as a service offerings, memberships and a platform for management services.

Gestational age linked to ADHD in children with Down syndrome

For SoftBank the SPAC deal may give it a way to recover some of its investments over the last three years. Marcelo Claure, Executive Chairman of WeWork, said WeWork is an inflection point to disrupt commercial real estate. The one argument for WeWork is that it’s a commercial real estate play in a sector that can go up when people return to offices.

The argument for WeWork as a public company go like this:

WeWork improved its free cash flow by $1.6 billon by restructuring and exiting non-core ventures. WeWork cut headcount by 67% from its peak in September 2019. The company exited 106 pre-open and underperforming locations and amended more than 100 leases. WeWork has 851 locations in 152 cities after retooling. Enterprise companies are half of WeWork’s customer base now, up from 10% in 2015.And WeWork has a $4 billion total sales pipeline and $1.5 billion in committed 2021 revenue.

WeWork is projecting that revenue will more than double from 2021 to 2024 with $2 billion in adjusted EBITDA. 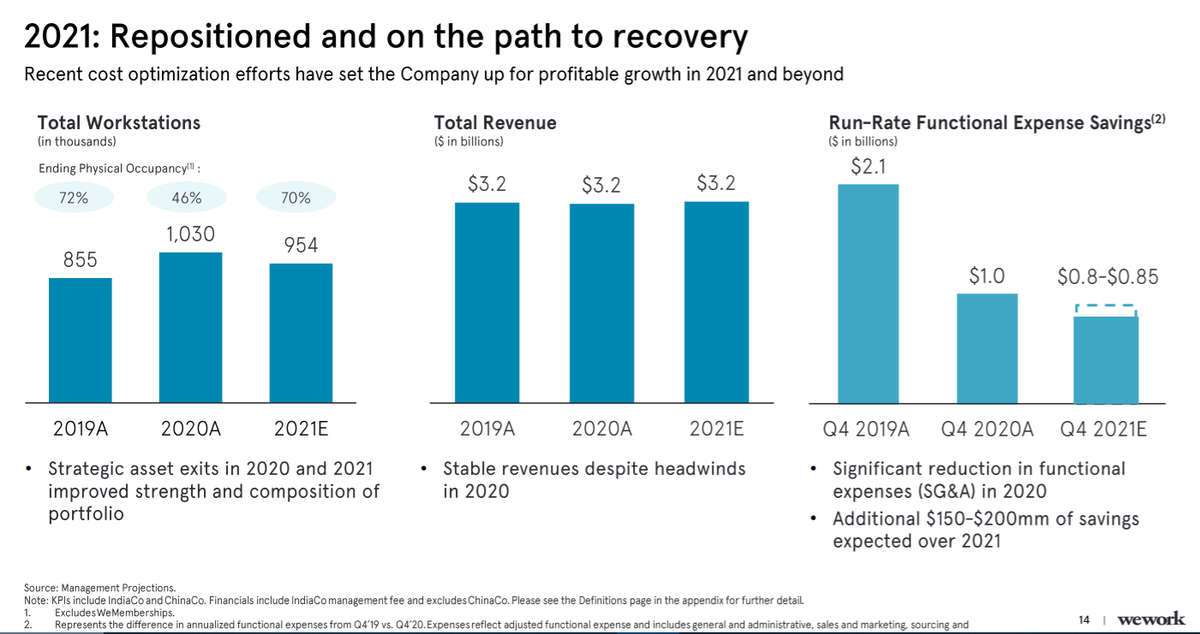