What happens in the brain when people make music together? 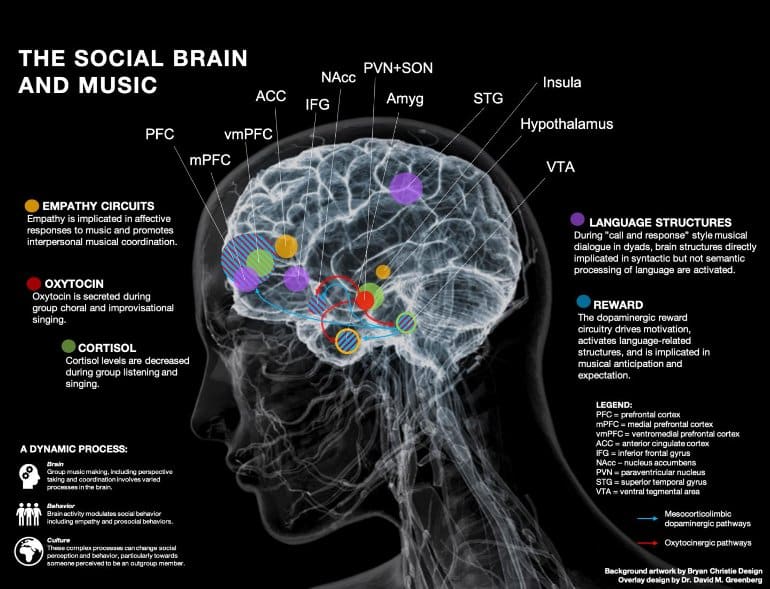 Music is a tool that has accompanied our evolutionary journey and provided a sense of comfort and social connection for millennia. New research published today in the journal American Psychologist provides a neuroscientific understanding of the social connection with a new map of the brain when playing music.

A team of social neuroscientists from Bar-Ilan University and the University of Chicago introduced a model of the brain that sheds light on the social functions and brain mechanisms that underlie the musical adaptations used for human connection. The model is unique because it focuses on what happens in the brain when people make music together, rather than when they listen to music individually.

The research was inspired by creative efforts of people around the world to reproduce music-making together while social distancing during the COVID-19 pandemic. This included people singing songs in unison from balcony to balcony, group singing on video conferencing platforms such as Zoom, and live living room concerts by the likes of Yo Yo Ma, Chris Martin from Coldplay, and Norah Jones.

The team fused the latest advances in social neuroscience and the field of music, including evolutionary theory. They synthesized these advances and highlighted five key functions and mechanisms of the brain that contribute to social connection through music.

These are (1) empathy circuits, (2) oxytocin secretion, (3) reward and motivation, including dopamine release, (4) language structures, and (5) cortisol. These five functions and mechanisms involve at least 12 important brain regions and two pathways which are mapped here.

Empathy helps us to tune into how other people are thinking and feeling, and can be improved through interpersonal musical coordination.

Oxytocin is sometimes called the “love hormone” because it contributes to our sense of feeling socially bonded with others. It is secreted when people sing together, even when the singing is improvised.

Dopamine is a neurotransmitter that produces a sense of pleasure and is released during musical anticipation and expectation, and pivotal for our sense of reward and motivation.

Language structures in the brain are involved in back-and-forth musical dialogue (sometimes referred to as “call” and “response”).

Cortisol is a hormone that contributes to stress, but it is decreased in the brain when people sing together and when they listen to music together in groups.

The authors say a better understanding of the social neuroscience of music can play an important role for helping to improve social bonding around the world, particularly in cultures that are in conflict. They conclude that music is a powerful tool that can bring individuals together, promote empathy and communication, and heal social divisions. They say that a better scientific understanding of how music provides brain-to-brain social connections helps highlight that music isn’t mere entertainment, but instead is a core feature of human existence with important social implications.

Dr. David Greenberg, who led the research, is a social neuroscientist, professional musician, and Zuckerman Postdoctoral Scholar at Bar-Ilan University in Israel. He says, “Music connects us to our humanity. Through social neuroscience, we can discover that our sense of social connection isn’t just subjective, but that it is rooted in important brain mechanisms. Especially in a time when there is so much social division around the world, we need to find new ways to to bridge cultures in conflict. Music is one of those ways. We hope our research will lead to more grassroots programs like the West-Eastern Divan Orchestra and the Jerusalem Youth Chorus, which bring people from differing cultures together through music.”

Dr. Ilanit Gordon, an Associate Professor at the Department of Psychology and Director of the Social Neuroscience Lab at the Gonda (Goldschmied) Multidisciplinary Brain Research Center at Bar-Ilan, says, “Human sociality is rooted in our biological makeup. Through music we can connect and interact with others, and via the scientific exploration of the neurobiological basis of music, we can further our understanding of major issues in social neuroscience.”

Jean Decety, the Irving B. Harris Distinguished Service Professor in Psychology and Psychiatry, and director of Child Neurosuite at the University of Chicago, says, “Music is a fundamental part of our evolution, allowing for unique expressions of social ties. It can strengthen cohesion and mutual trust between people by signaling shared values. It is quite fascinating to understand the neurobiological mechanisms of music.”