When devastation strikes the oceans, sharks can hold the key to recovery 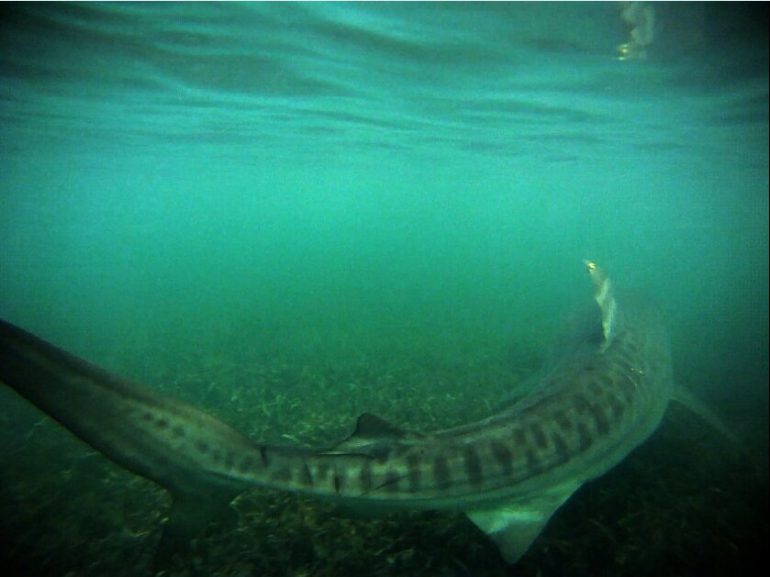 A world without sharks is a world less resilient to extreme climate events, scientists say.

Predators, including some sharks, are known to be critical for maintaining stability and biodiversity in the world’s oceans. But according to a new study, they are also critical in helping ecosystems recover when devastation hits from hurricanes or marine heatwaves.

It’s a basic food web problem. Grazing animals, including turtles and dugongs, eat seagrass. Sharks eat the grazers. Grazers fear the sharks. So, when sharks are around, the grazers often avoid the area. While the grazers are away, the aquatic plants have time to grow and recover. When an extreme climate event strikes, the ecosystem must deal with a whole new set of variables that requires time to recover.

In a unique experiment, a team of scientists tested whether an ecosystem could recover if sharks were no longer there to keep other animals in check. The answer is no, according to Mike Heithaus, a co-author of the study, marine ecologist and dean of Florida International University’s College of Arts, Sciences & Education.

A mix of predator and seagrass experts, the scientists conducted their study in Shark Bay, Australia—a pristine and largely untouched region of the world—where tiger sharks like to spend their summers, making it quite uncomfortable for resident grazers, especially dugongs. The grazers prefer the shallow seagrass meadows. But this is also the most dangerous place to be, so the dugongs head for safer waters until the sharks leave in winter and it’s safe for them to return to the shallows.

But in 2011, the dugongs were living in a very different Shark Bay. A historic heatwave decimated much of the bay’s seagrass, which is more than just dugong food. The seagrass helps maintain water clarity and serves as a habitat for commercially lucrative fish and other organisms. It also happens to be really great at storing CO2 emissions.

Recovery from the heatwave has been slow but aided by the seasonal presence of sharks. The initial die-off of the seagrass canopy, which can grow as high as 6 feet, paved the way for more heat-tolerant seagrasses. Dugongs prefer these new seagrasses and so grazing in the shallow areas was expected to continue. Unfortunately, the heat-tolerant seagrass doesn’t provide the same level of services to the bay as the large, canopy forming seagrasses that were decimated in 2011.

The scientists, wondering what would happen if sharks didn’t return during the summer, decided to create an ‘eternally safe’ Shark Bay. To do this, they used previous calculations of how many dugongs were around and how much they ate to perform the role of the grazer themselves, mimicking the way dugongs feed on the seagrass during the summer. The experiment left the area with no recovery time—meaning if the dugongs grazed year-round, they’d end up inadvertently destroying the critically important canopy species. The research shows that when top predators are gone, not only does the structure of the ecosystem break down, but it’s also all-but-impossible for that ecosystem to stage a comeback.

This could lead to a complete shift in the seagrass community, where tropical species dominate, but causes major damage to the rest of the environment, according to lead author Rob Nowicki, a research affiliate at Mote Marine Laboratory, who conducted the research as a Ph.D. student at FIU.

“One of the reasons we did this study is because we think it’s important to be thinking about how everything is linked and sometimes those linkages are surprising,” said Nowicki. “But they show climate resilience is not something that happens on its own. It happens in conjunction with species conservation.”

The research team—which also included FIU Institute of Environment seagrass expert James Fourqurean and scientists from the University of Washington and Deakin University—says this is why sharks are so important to the oceans, for people who rely on the oceans for food and to help mitigate climate change by protecting plants that store CO2.

The study was only possible because of Heithaus’ and the rest of the Shark Bay Ecosystem Research Project’s studies of tiger sharks and their role in the Shark Bay ecosystem. He has documented the role tiger sharks play in changing the behavior of their prey and the impact their behaviors have for entire ecosystems.

Every ecosystem on the planet depends on a delicate balance of relationships and Heithaus says these latest findings could have implications for other ecosystems. The goal, the researchers say, should be to always keep the links linked by conserving the predators and their prey.

“Ultimately to rein in climatic extremes that are becoming more common and intense, we know we need to cut carbon production. But that’s going to take time,” Nowicki said. “It’s almost like we’re on a leaky boat with a hole. We need to fix the boat at some point, but in the meantime, we can grab a bucket and get the water out. That’s kind of what we’re doing here—we’re making the case that protecting predator species and keeping these species relationships can actually lead to resilience to these events. It can buy us time. And we need as much time as we can get.”

The findings were published in the Journal of Animal Ecology.

Sharks revealed as the great protectors of seagrass


Citation:
When devastation strikes the oceans, sharks can hold the key to recovery (2021, February 26)
retrieved 26 February 2021
from https://phys.org/news/2021-02-devastation-oceans-sharks-key-recovery.html