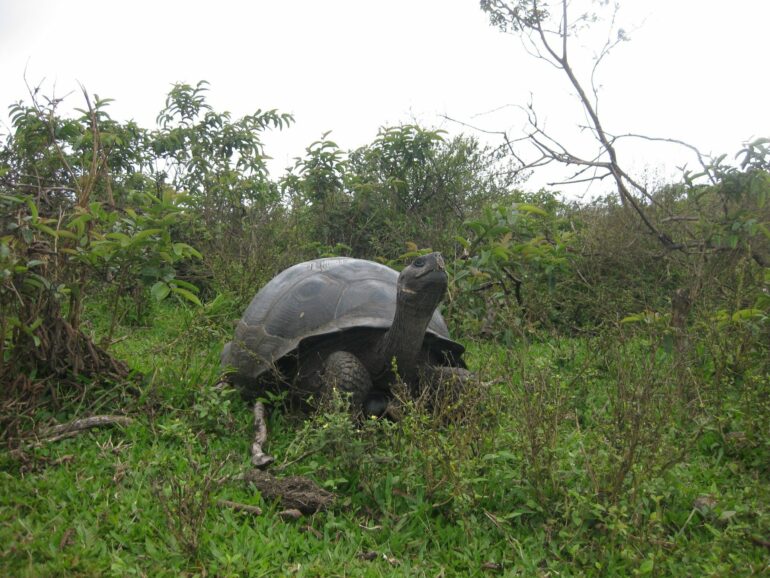 Galápagos giant tortoises can weigh well over 300 pounds and often live over 100 years. So what’s the secret to their evolutionary success?

A new study concludes that compared with other turtles, these animals evolved to have extra copies of genes—called duplications—that may protect against the ravages of aging, including cancer.

Laboratory tests on Galápagos giant tortoise cells corroborate the idea that the animals have developed such defenses, says Vincent Lynch, an evolutionary biologist at the University at Buffalo.

Specifically, experiments showed that the creatures’ cells are super sensitive to certain types of stress relating to damaged proteins. When exposed to these pressures, the cells self-destruct much more readily than other turtle cells through a process called apoptosis, the research found. Destroying glitchy cells before they have the chance to form tumors could help the tortoises evade cancer, Lynch says.

“In the lab, we can stress the cells out in ways that are associated with aging and see how well they resist that distress. And it turns out that the Galápagos tortoise cells are really, really good at killing themselves before that stress has a chance to cause diseases like cancer,” says Lynch, Ph.D., associate professor of biological sciences in the UB College of Arts and Sciences.

The study was published on Nov. 18 in Genome Biology and Evolution. The findings both confirm and build on results of past research, such as a 2018 study by another team that also used genetic analyses to explore longevity and age-related disease in giant tortoises.

The findings are particularly intriguing because—all things being equal—huge animals that live for a long time should have the highest cancer rates. That’s because big, long-lived things have many more cells, and the more cells a body has, the more opportunities there are for cancerous mutations to arise.

One major focus of Lynch’s work is understanding the biological mechanisms that help big animals like Galápagos tortoises live long and prosper. (His team explored this question in elephants in a 2021 study). The research is driven by simple curiosity. But the findings could have practical implications, too.

“If you can identify the way nature has done something—the way certain species have evolved protections—maybe you can find a way to translate those discoveries into something that benefits human health and disease,” Lynch says. “We’re not going to go treating humans with Galápagos tortoise genes, but maybe we can find a drug that mimics certain important functions.”

Research of this kind also underscores the value of conservation.

“Studies like this demonstrate why preserving biodiversity is so important,” says Glaberman, the paper’s first author and an assistant professor of environmental science and policy at George Mason University. “Extreme species like Galápagos giant tortoises probably hold many secrets for dealing with major human challenges like aging and cancer, and even climate change. Our study also shows that even within turtles, different species look, act and function differently, and losing any species to extinction means that a piece of unique biology will be lost to the world forever.”