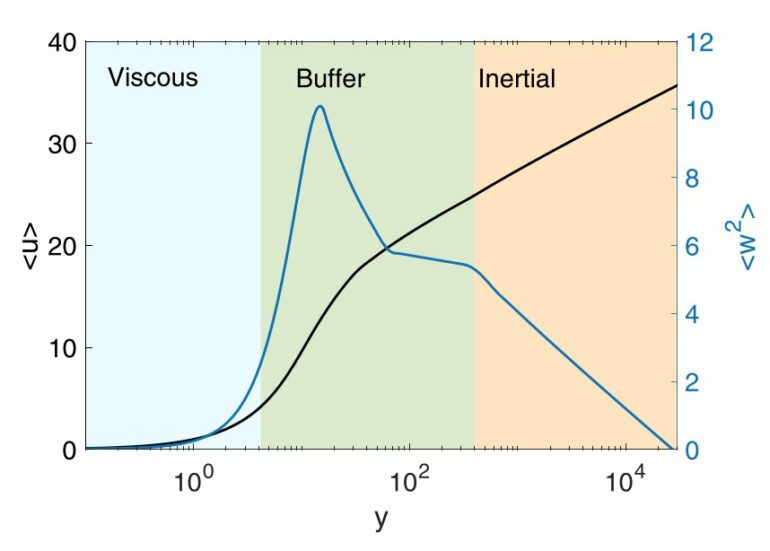 Turbulence makes many people uneasy or downright queasy. And it’s given researchers a headache, too. Mathematicians have been trying for a century or more to understand the turbulence that arises when a flow interacts with a boundary, but a formulation has proven elusive.

Now an international team of mathematicians, led by UC Santa Barbara professor Björn Birnir and the University of Oslo professor Luiza Angheluta, has published a complete description of boundary layer turbulence. The paper appears in Physical Review Research, and synthesizes decades of work on the topic. The theory unites empirical observations with the Navier-Stokes equation—the mathematical foundation of fluid dynamics—into a mathematical formula.

This phenomenon was first described around 1920 by Hungarian physicist Theodore von Kármán and German physicist Ludwig Prandtl, two luminaries in fluid dynamics. “They were honing in on what’s called boundary layer turbulence,” said Birnir, director of the Center for Complex and Nonlinear Science. This is turbulence caused when a flow interacts with a boundary, such as the fluid’s surface, a pipe wall, the surface of the Earth and so forth.

The fluid flows quicker farther from the boundary, but its velocity changes in a very specific manner. Its average velocity increases in the viscous and buffer layers and then transitions to a logarithmic function in the inertial layer. This “log law,” found by Prandtl and von Kármán, has perplexed researchers, who worked to understand where it came from and how to describe it.

The flow’s variation—or deviation from the mean velocity—also displayed peculiar behavior across the boundary layer. Researchers sought to understand these two variables and derive formulas that could describe them.

In the 1970s, Australian mechanical engineer Albert Alan Townsend suggested that the shape of the mean velocity curve was influenced by eddies attached to the boundary. If true, it could explain the odd shape the curve takes through the different layers, as well as the physics behind the log law, Birnir said.

Fast forward to 2010, and mathematicians at the University of Illinois released a formal description of these attached eddies, including formulas. The study also described how these eddies could transfer energy away from the boundary toward the rest of the fluid. “There’s a whole hierarchy of eddies,” Birnir said. The smaller eddies give energy to the larger ones that reach all the way into the inertial layer, which helps explain the log law.

However, there are also detached eddies, which can travel within the fluid, and these also play an important role in boundary layer turbulence. Birnir and his co-authors focused on deriving a formal description of these. “What we showed in this paper is that you need to include these detached eddies in the theory as well in order to get the exact shape of the mean velocity curve,” he said.

Their team combined all these insights to derive the mathematical formulation of the mean velocity and variation that Prandtl and von Kármán first wrote about some 100 years earlier. They then compared their formulas to computer simulations and experimental data, validating their results.

“Finally, there was a complete analytical model that explained the system,” Birnir said. With this new mathematical formulation, scientists and engineers can adjust different parameters to predict the behavior of a fluid.

And boundary layer turbulence appears in all sorts of fields, from transportation to meteorology and beyond. “I think it’s going to have a lot of applications,” Birnir remarked. For instance, a proper understanding of boundary turbulence can help make more efficient engines, reduce pollutants and minimize drag on all sorts of vehicles.

Earth’s atmosphere can be modeled as a boundary flow. Despite its apparent height, the atmosphere is essentially a thin shell of moving air hugging the planet’s surface. “I think, ultimately, we will be able to use this theory to understand both atmospheric turbulence and the jet stream,” Birnir said. “It’s going to be quite useful.”

Quantum marbles in a bowl of light

The authors were surprised to discover how important detached eddies were, especially in explaining the turbulence transition in the buffer layer. Studying their behavior has begun to provide insight into other types of turbulence.

“In particular, we get insights into Lagrangian turbulence,” said Birnir, referencing the theory that describes turbulent behavior in a reference fame that moves with the flow, like a raft on a river. This contrasts with Eulerian turbulence theory, which describes the fluid as it moves past a fixed reference frame, like a pier on the riverbank. Attached eddies disappear in the moving reference frame—much like a current seems to disappear when you’re headed downstream. “But the detached eddies are still there,” Birnir said, “and they seem to play a major role in Lagrangian turbulence.”

The team is currently focused on exploring Lagrangian turbulence with these new tools, which themselves originally came from work on homogenous turbulence, where there is no boundary. “Insights that you get in one field help you in another,” Birnir observed.