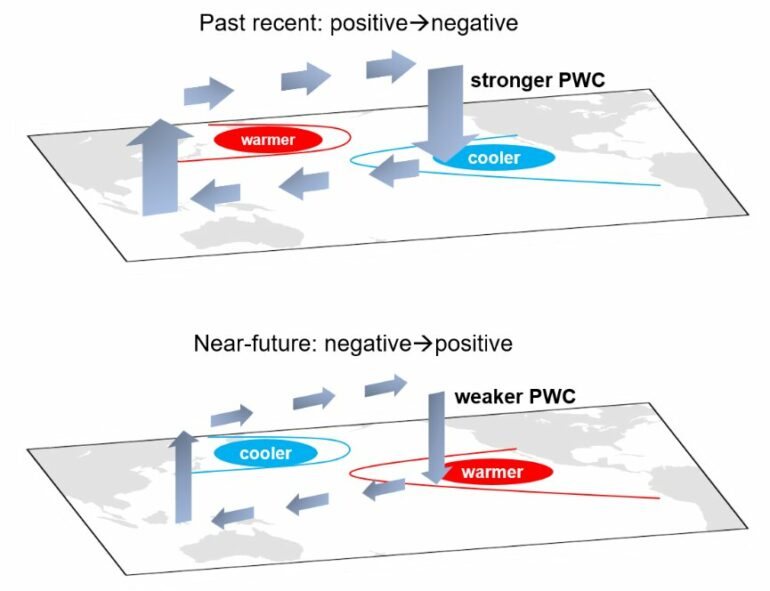 The study was published in Nature Communications on Nov. 11. It was conducted by researchers from the Institute of Atmospheric Physics (IAP) of the Chinese Academy of Sciences and the Max Planck Institute for Meteorology.

The Pacific Walker circulation, a large east-west atmospheric circulation along the equatorial Pacific, is observed strengthening during recent decades (1980–2015). The strength of Walker circulation can regulate the heat budget of the global climate system via air-sea interactions and has extensive impacts on water cycle over regions like the South Asia, the Maritime Continent and the Amazon basin.

The phase transition from positive-to-negative of the ENSO-like fluctuations, known as the Interdecadal Pacific Oscillation, could explain 63% (~51–72%) of the observed Pacific Walker circulation strengthening over the period of 1980–2015, according to Zhou Tianjun, a senior scientist at IAP, the corresponding author of the study. Zhou is also a professor at the University of Chinese Academy of Sciences (UCAS).

“Based on the large ensemble simulations from six climate models, we quantified the contributions of external forcing and natural variability to the long-term change of the Pacific Walker circulation for the first time. We have identified the leading role of the Pacific Ocean in driving the decadal change of the Walker circulation and provided a constrained projection of its near-future change,” said Wu Mingna, the first author of the study, who is a Ph.D student from the UCAS.

“Looking into the future, the phase of Interdecadal Pacific Oscillation in the Pacific Ocean could last into the coming decades and the Walker circulation is likely to weaken if we use the IPO phase predicted by the most skillful ensemble members to constrain the PWC projection,” said Li Chao, a climate modeler at the Max Planck Institute for Meteorology, co-author of the study. “Consequently, the South Asia summer monsoon rainfall might be reduced, the northern part of the western Amazon is likely to experience a drier climate, and less rainfall is expected over large areas of the Maritime Continents.”

These findings highlight an urgent need to improve the prediction of IPO and other decadal internal modes of climate variability.

Droughts in the sixth century paved the way for Islam