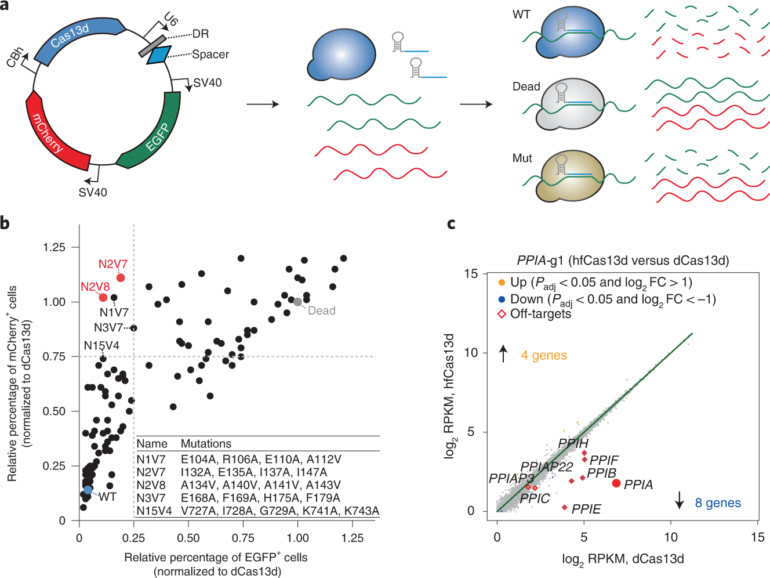 A recent study published in Nature Biotechnology revealed the development of high-fidelity Cas13 variants with markedly reduced collateral effects by mutagenesis and demonstrated the feasibility of hfCas13 for efficient on-target RNA degradation with almost no collateral damage in mammalian cells and animals.

This work was performed by researchers in Dr. Yang Hui’s Lab at the Institute of Neuroscience, Center for Excellence in Brain Science and Intelligence Technology of the Chinese Academy of Sciences, State Key Laboratory of Neuroscience and R&D team from HuiGene Therapeutics Co., Ltd.

The CRISPR-Cas13 system is a highly efficient tool for programmable RNA targeting, and has been harnessed for nucleic acid detection and RNA manipulations in various cell types and organisms. However, concerns have been raised over the off-targeting effects of Cas13. Previous structural studies have implicated that upon binding of Cas13 to target RNA, the two HEPN nuclease domains could form a catalytic site on the protein surface, providing potential for promiscuous cleavage of bystander RNAs apart from the on-target cleavage of target RNAs.

Due to this so-called collateral effect, Cas13 could degrade both target and non-target RNAs at random, thus making it difficult to design experiments and interpret results when using Cas13.

Therefore, attempts to diminish or eliminate promiscuous RNA degradation via engineering approaches are required for basic research and future in vivo applications of Cas13 system.

Then the researchers sought to engineer Cas13d (RfxCas13d or CasRx, Cas13d from Ruminococcus flavefaciens XPD3002) via mutagenesis and screen for variants with minimal collateral effects, based on a new well-designed dual-fluorescent reporter system comprised of a single plasmid containing EGFP, mCherry, and EGFP-targeting gRNA, together with each Cas13 variant.

Importantly, Yang and his team identified CRISPR-Cas13X system in 2021, the smallest (only 775 amino acids) RNA editing tool at present. In their new study, the researchers further engineered Cas13X and obtained hfCas13X variant exhibiting high specificity of on-target RNA degradation but minimal collateral effects. hfCas13X will show great application potential in the field of gene therapy based on RNA editing.

This is your gut on sushi