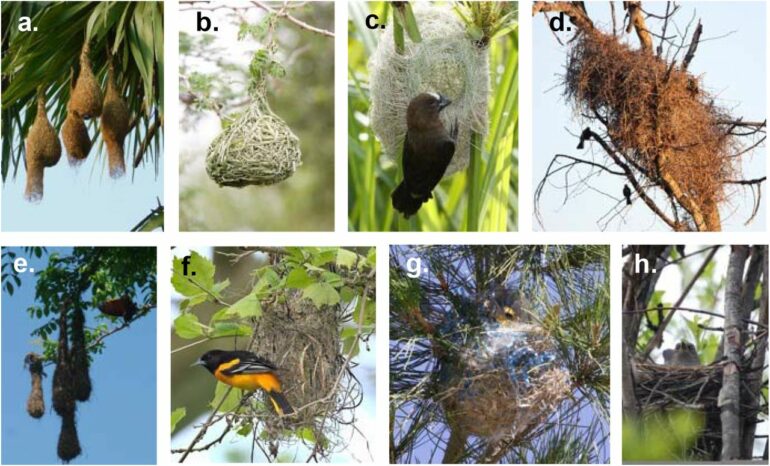 A new study has found that birds build hanging-nests, particularly those with extended entrance tunnels, to help protect offspring against nest invaders like snakes and parasitic cuckoos.

Researchers at Durham University, the British Trust for Ornithology and Princeton University examined the relationship between nest design and the length of time offspring spend in the nest before fledging across species of weaverbirds and icterids, two bird families renowned for their complex woven nests.

They found that species building the most elaborate nests, particularly those with long entrance tunnels, produce offspring with longer developmental periods.

Nests with longer entrance tunnels are more effective at hindering access by nest invaders than shorter tunnels and thereby limits the exposure of developing offspring to nest invaders.

Researchers suggest that the complex structural features in these nests do indeed play a role in protecting offspring from predators and brood parasites.

They find the consistency of these findings “striking” given that highly elaborate nests have evolved independently in the weaverbirds and icterids.

Full analysis of the study has been published in the journal Proceedings of the Royal Society B.

Lead author of the study, Dr. Sally Street of Durham University, said, “Ornithologists have long been fascinated by the beautifully woven nests of weaverbirds and icterids—these nests often dangle precariously from slim branches and some have extended entrance tunnels up to a meter long.

“It has been widely assumed that these nests prevent attacks by tree-climbing snakes but this idea is largely based on anecdotes until now. We are excited to show that these ideas appear to be correct—species building the most elaborate nests, particularly those with long entrance tunnels, have more slowly developing offspring which is exactly what we should expect if the nests protect chicks from predators and other nest invaders such as brood parasitic cuckoos”

Researchers have also revealed that by building protective structures such as the elaborate nest, birds and other species can deploy greater control over their exposure to environmental hazards.

The scientists obtained data on nest design, life-history traits, body mass and latitude in weaverbird and icterid species from multiple secondary sources for the purpose of this study.

Their study findings reveal how animal architects such as nest-building birds and burrowing mammals can create protective environments that change how their offspring develop.

The researchers say this may even help to understand the role of shelter-building in human evolution.