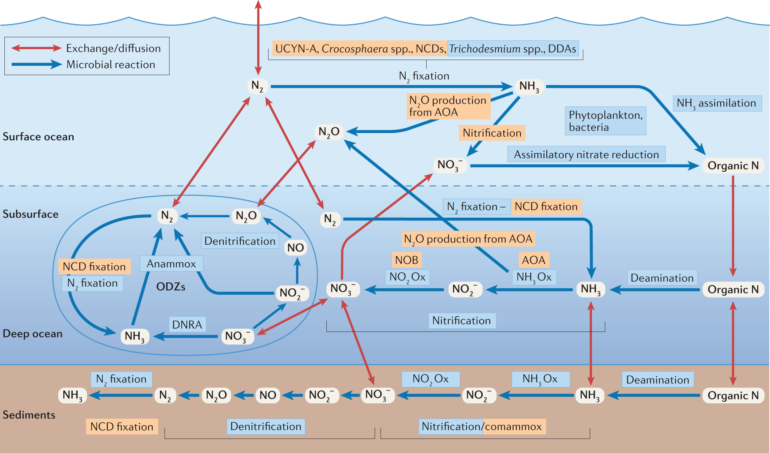 Nitrogen scarcity limits the growth of ocean phytoplankton, a globally important carbon sink and the base of the marine food web. Nitrogen that can be used by phytoplankton generally has a very low concentration in the sunlit layer of the open ocean, but the two primary sources of new nitrogen in the surface oceans are nitrate coming up from the deep, and biological nitrogen “fixation” of N2 gas from the atmosphere by some cyanobacteria.

In new research published in Nature Communications, the team found that an alternative class of nitrogen fixers, which are not photosynthetic, are associated with marine particles and fix nitrogen in some parts of the ocean.

“For over three decades, scientists have known this alternative class of nitrogen-fixing organism is widespread in the surface oceans, but we lacked direct evidence that they can actually fix nitrogen until now,” said lead author and former LLNL graduate scholar Katie Harding. Harding was a graduate student at UC Santa Cruz in the laboratory of Jonathan Zehr, who has spent decades studying marine nitrogen fixation.

LLNL scientist Xavier Mayali said it was challenging to find this activity.

“We found it because we were able to use our nanoSIMS instrument to localize individual cells on marine particles,” Mayali said. “So the nitrogen fixers that are not photosynthetic do not appear to be free-floating, but instead they are attached to marine detritus that eventually sink into the deep ocean.”

In the new research, the team members used combined carbon (C) and nitrogen (N) rare stable-isotope labeling so they could separate organisms that incorporated both N and C (like photosynthetic N-fixing cyanobacteria) from those that only incorporated N (non-cyanobacterial N-fixing organisms).

The nanoSIMS instrument at LLNL allows the C and N rare isotopes to be quantified at the single-cell level and was able to detect the hypothesized N-fixers after the samples were incubated at sea with labeled N2 gas and CO2.

It is not yet known what the significance of this finding is for the health of the oceans.

“More growth by phytoplankton, partially fueled by nitrogen input, could benefit marine life,” Mayali said. “If sinking marine particles have more nitrogen in them from this activity, it could potentially make them more nutritious for the organisms living in the deep sea.”

A better understanding of the sources of ocean N also affects the ability to predict ocean C uptake because marine phytoplankton are generally limited by N. If they have enough N, they will uptake more C from the atmosphere. So even though the newly discovered organisms are not photosynthetic, the N they fix could be used down the line by organisms that do fix C. Also, the sinking of marine detritus, where these N fixers were found, is one of the primary mechanisms of natural C sequestration in the oceans.

The dual isotope-labeling approach has applications in other fields such as C storage in soils and biofuels. “We can use this method to search for these types of organisms in soils and in biofuel-producing algal crops, especially in N-poor environments where N fixing organisms will be important for ecosystem health,” Mayali said.


Citation:
Scientists use carbon to detect a new nitrogen source in the open ocean (2022, November 18)