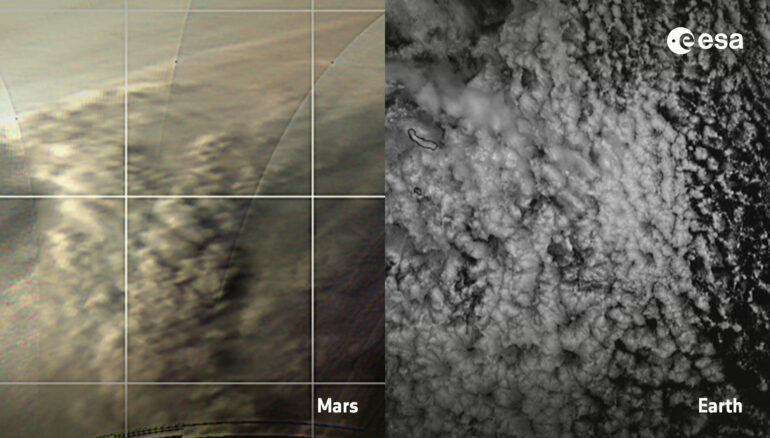 ESA’s Mars Express has revealed that Mars churns up surprisingly Earth-like cloud patterns that are reminiscent of those in our planet’s tropical regions.

Earth and Mars have vastly different atmospheres. The dry, cold atmosphere of Mars is composed almost entirely of carbon dioxide while Earth’s is rich in nitrogen and oxygen. Its atmospheric density is less than one fiftieth of Earth’s atmosphere—equivalent to the density found at about 35 km above Earth’s surface.

Despite being wildly different, their cloud patterns have been found to be surprisingly Earth-like, pointing to similar formation processes.

A new study dives deeper into two dust storms that occurred near the Martian North Pole in 2019. The storms were monitored during springtime at the North Pole, a time when local storms commonly brew around the receding ice cap.

Two cameras on board Mars Express—the Visual Monitoring Camera (VMC) and the High Resolution Stereo Camera (HRSC)—together with the MARCI camera on board NASA’s Mars Reconnaissance Orbiter, imaged the storms from orbit.

The sequence of VMC images shows that the storms appear to grow and disappear in repeated cycles over a period of days, exhibiting common features and shapes. Spiral shapes are notably visible in the wider views of the HRSC images. The spirals are between 1,000 and 2,000 km in length, and their origin is the same as that of the extratropical cyclones observed in Earth’s mid-latitudes and polar latitudes.

The images reveal a particular phenomenon on Mars. They show that the Martian dust storms are made up of regularly spaced smaller cloud cells, arranged like grains or pebbles. The texture is also seen in clouds in Earth’s atmosphere.

The familiar textures are formed by convection, whereby hot air rises because it is less dense than the cooler air around it. The type of convection observed here is called closed-cell convection, when air rises in the center of small cloud pockets, or cells. The gaps of sky around the cloud cells are the pathways for cooler air to sink below the hot rising air.

On Earth, the rising air contains water which condenses to form clouds. The dust clouds imaged by Mars Express show the same process, but on Mars the rising air columns contain dust rather than water. The sun heats dust-laden air causing it to rise and form dusty cells. The cells are surrounded by areas of sinking air which have less dust. This gives rise to the granular pattern also seen in the image of clouds on Earth.

By tracking the movement of cells in the sequence of images, the wind speed can be measured. Wind blows over the cloud features at speeds of up to 140 km/h, causing the shape of the cells to elongate in the direction of the wind. Despite the chaotic and dynamic atmospheres of Mars and Earth, nature creates these orderly patterns.

“When thinking of a Mars-like atmosphere on Earth, one might easily think of a dry desert or polar region. It is quite unexpected then, that through tracking the chaotic movement of dust storms, that parallels can be drawn with the processes that occur in Earth’s moist, hot, and decidedly very un-Mars-like tropical regions,” comments Colin Wilson, ESA’s Mars Express project scientist.

One key insight made possible with the VMC images is the measurement of the altitude of dust clouds. The length of the shadows they cast are measured and combined with knowledge of the sun’s position to measure the height of the clouds above the Martian surface. Results revealed that dust can reach approximately 6–11 km above the ground and the cells have typical horizontal sizes of 20–40 km.

“Despite the unpredictable behavior of dust storms on Mars and the strong wind gusts that accompany them, we have seen that within their complexity, organized structures such as fronts and cellular convection patterns can emerge,” explains Agustín Sánchez-Levaga from the Universidad del País Vasco UPV/EHU (Spain), who leads the VMC science team and is lead author of a paper presenting the new analysis.

Such organized cellular convection is not unique to Earth and Mars; observations of the Venusian atmosphere by Venus Express arguably show similar patterns. “Our work on Mars dry convection is a further example of the value of comparative studies of similar phenomena occurring in planetary atmospheres in order to better understand the mechanisms underlying them under different conditions and environments,” adds Agustín.

As well as learning more about how planetary atmospheres “work,” understanding dust storms is relevant for future missions to Mars. In extreme cases, dust storms can block much of the light from the sun from reaching the solar cells of rovers on the surface of the red planet. In 2018, a planetary-scale dust storm not only blocked sunlight reaching the surface, but also covered the solar panels of NASA’s Opportunity rover with dust. Both of these factors led to the rover losing electrical power, ending the mission.

Monitoring the evolution of dust storms is crucial for helping protect future solar-powered missions—and eventually crewed missions to the planet—against such powerful phenomena.

“Cellular patterns and dry convection in textured dust storms at the edge of Mars North Polar Cap,” by A. Sánchez-Lavega et al, is published in the November 15, 2022 issue of the journal Icarus.