Where should we impact an asteroid to effectively deflect its orbit? 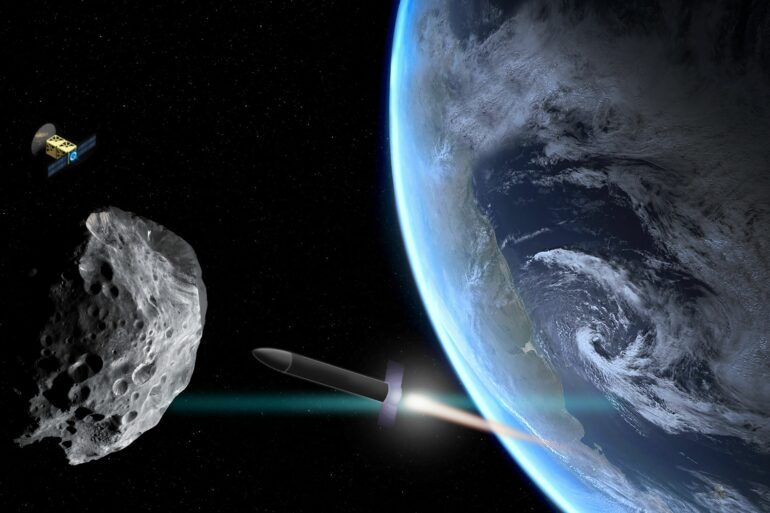 Recently, NASA’s Double Asteroid Redirection Test (DART) spacecraft crashed into a 170 m asteroid Dimorphos at 6.6 km/s, as the first on-orbit demonstration of deflecting an asteroid by kinetic impact. The DART spacecraft was set to impact the center of Dimorphos nearly head-on. Earth-based telescopes have now confirmed that impact successfully changed Dimorphos’ orbit period by 32 minutes, much more than expected.

But, where should we impact an asteroid to most effectively deflect its orbit? Simply towards the center of the asteroid? These questions have yet to be well investigated.

In a new paper published in the Journal of Guidance, Control, and Dynamics, researchers of Tsinghua University proposed an optimal kinetic-impact geometry to improve the effective magnitude of kinetic-impact deflection, which should promote our understanding of how to make full use of a kinetic impactor and get best results. They found a well-designed off-center impact appeared to increase the deflection efficiency by over 50% compared to the central impact used by the DART mission.

Their work shows a surprising result that no matter what the target asteroid looks like or which location/direction to impact, the velocity change of the asteroid is always located on a unique hodograph, which is only determined by the material properties of the asteroid. They call it the Delta-v hodograph.

“The Delta-v hodograph is actually a distortion of an ideal spherical surface. And the determination of a realistic profile requires quantifying the effect of impact angles on momentum transfer efficiencies, which can be calculated from hydrodynamical simulations of oblique impacts,” the researchers explained.

The effective deflection is increased by up to 50% when striking the optimal location compared with a simple centered impact.

For Itokawa-like elongated asteroids, the impact direction determines the distribution of Delta-v set on the hodograph and, thus, the optimal rotational phase to impact. A preferable direction can even increase the final deflect distance by 100% compared to the value for an inappropriate direction.

“This work presents a simple and innovative application of Delta-v hodograph to the optimal geometry design in kinetic deflections of PHAs, as a connection of hyper-velocity impact and long-term orbital dynamics,” said the researchers. “The proposed optimization method should be considered in the global trajectory design of future asteroid deflection missions, where the expected deflection distance is determined by not only the orbital geometry but also the impact geometry.”


Citation:
Where should we impact an asteroid to effectively deflect its orbit? (2022, November 17)