TMBIM5, an important piece of the mitochondrial exchange puzzle discovered 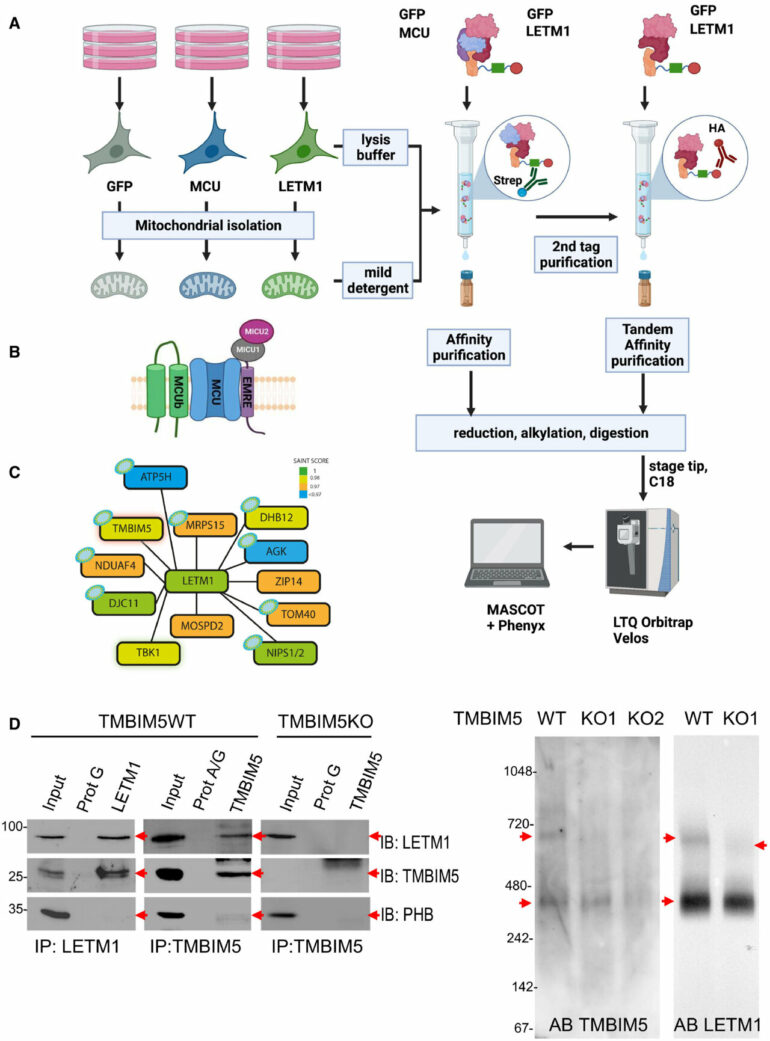 Mitochondrial Ca2+ ions are crucial regulators of bioenergetics and cell death pathways. Essential in this context are so-called Ca2+ transporters. In recent decades, the major players responsible for mitochondrial Ca2+ uptake and release have been identified, with the exception of the mitochondrial Ca2+/H+ exchanger (CHE).

A research team from the University of Veterinary Medicine Vienna has now put an end to the search with the identification of the protein TMBIM5 as the long-sought mitochondrial CHE. The discovery promises a better understanding of diseases and may enable the development of new treatments.

Ion homeostasis is crucial for mitochondrial function. The dynamic balance of cations is achieved by a set of integrated transport systems for K+, Na+ and Ca2+. Loss of this balance between cation uptake and release has serious consequences and can ultimately lead to cell death. Intracellularly, mitochondria are important sinks of Ca2+.

The role of mitochondrial Ca2+ buffering has been extensively studied, yet some of the players in maintaining Ca2+ balance have not been identified. One of the missing pieces in this molecular puzzle is the Na+-independent Ca2+ efflux pathway, a putative Ca2+/H+ exchanger (CHE). This exchanger, which has been sought since the 1970s, is critical for maintaining mitochondrial Ca2+ levels and pH homeostasis.

One of the CHE candidate proteins was LETM1, a protein that was initially characterized as the mitochondrial K+/H+ exchanger (KHE). Important questions about its function, however, have until recently remained unanswered. A research team at Vetmeduni therefore searched for partners of LETM1 and found the interactor Transmembrane BAX Inhibitor Motif containing protein 5 (TMBIM5).

After identifying TMBIM5, the researchers validated its physical interaction with LETM1. According to the first authors of the study, Shane Austin, Ronald Mekis and Sami Mohammed from the Department of Physiology and Biophysics at Vetmeduni, “Biochemical assays in human cells demonstrate that TMBIM5 is essential for the H+-dependent mitochondrial Ca2+ release and that a mutation in the pH-sensing domain of TMBIM5 completely or severely reduces this function.”

“Assays in proteoliposomes confirm pH-dependent Ca2+ transport by recombinant TMBIM5. Taken together, we demonstrate that TMBIM5, but not LETM1, is the long-sought mitochondrial CHE.”

“This finding provides the final piece of the puzzle of mitochondrial Ca2+ transporters and opens the door to exploring its importance in health and disease and to the development of drugs modulating Ca2+ exchange,” says the study’s last author, Karin Nowikovsky of the Department of Physiology and Biophysics at Vetmeduni.

According to the experts, further studies are now needed to understand how LETM1 and TMBIM5 link mitochondrial K+ and Ca2+ cycles and to shed more light on the regulatory mechanism of LETM1 and its interaction partners maintaining mitochondrial ion homeostasis.

The research was published in EMBO reports.

Provided by
University of Veterinary Medicine—Vienna