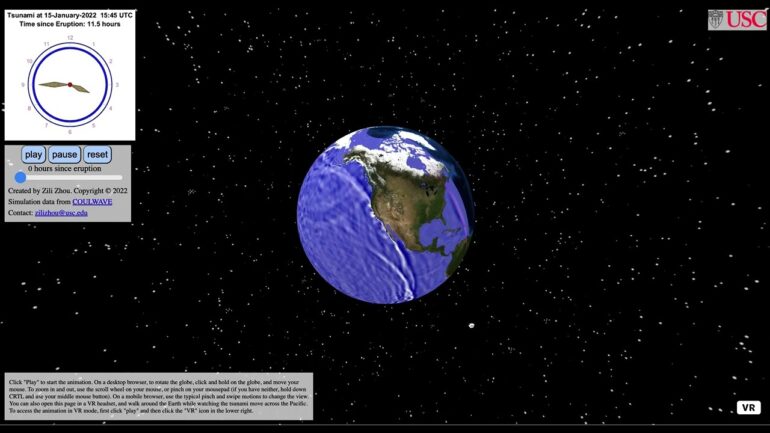 In 1883, there was a volcanic eruption so large it killed tens of thousands of people. It expelled so much ash that, for a time, it changed the colors of sunsets and the palette with which impressionist artists painted. In history, few volcanic eruptions have been so documented, until a recent underwater eruption earlier this year off the island nation of Tonga.

The impact of the January 2022 Hunga Tonga-Hunga Ha’apai volcano was recorded by University of Southern California researchers Patrick Lynett, Costas Synolakis and their colleagues. Their research is the first time a team was able to simultaneously collect oceanic, atmospheric and space data from a large underwater volcanic explosion. The findings are published in Nature.

“The diversity of generating mechanisms for the intense destruction near the event, and for the more sustained tsunami signal around the globe, illustrates how much more there is to learn about tsunami generation and how difficult a problem prediction is,” says Baris (Mete) Uz, a program director in NSF’s Division of Ocean Sciences.

The underwater explosion boiled the ocean, creating a 300-foot-deep and 5-mile-wide crater. The resulting tsunami sped away from the volcano toward Tonga, moving at 250 miles per hour. Lynett puts the explosion in perspective: People on Tonga, 50 miles away, could feel their ears pop from the pressure change generated by the explosion. The tsunami reached Tonga in 10 minutes and flooded land to an elevation of 60 feet, devastating resort communities.

The impact of the explosion and the tsunami it generated were not limited to Tonga and the southern Pacific Ocean. Lynett says the eruption generated a global tsunami, reaching California and the Mediterranean Sea.

Such a global tsunami was not generated directly by the explosion, but by a pressure pulse from the eruption that traveled in the atmosphere—the same pressure pulse that caused locals’ ears to pop. This pressure pulse was remarkably stable, the scientists say, was recorded on weather stations throughout the world, and traversed the globe multiple times.

As it traveled over the ocean, the pulse pushed the ocean surface with it, continually creating tsunamis throughout the world. In California, as well as Hawaii and South America, the tsunami was similar in size to one from the Japan earthquake of 2011.

Iodine accelerates formation of cloud condensation nuclei in the atmosphere