Looking back at the 2022 eruption that shook the world 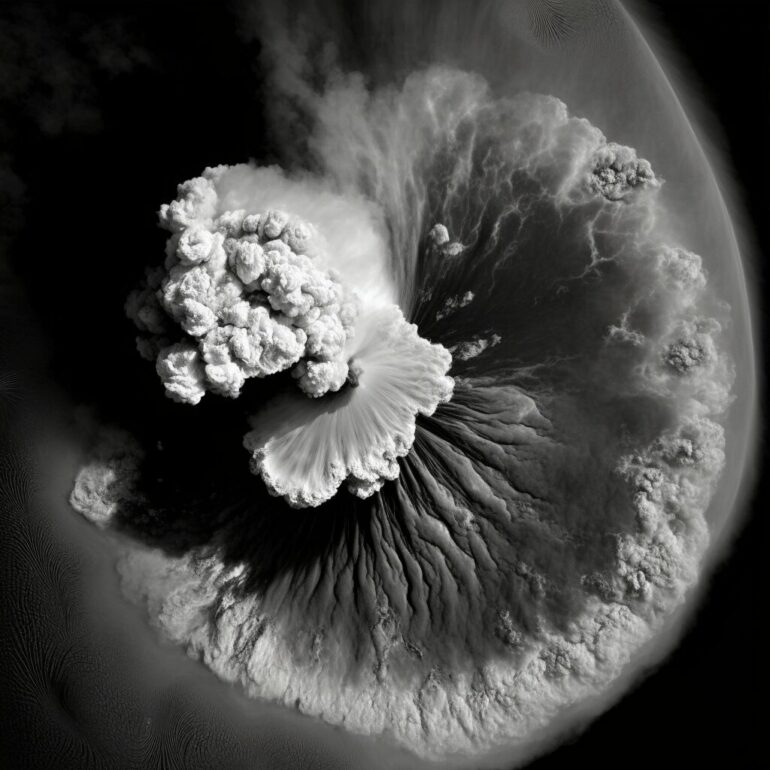 One year ago, the Hunga Tonga-Hunga Ha’apai volcano erupted, causing widespread destruction to the Pacific Island Nation of Tonga, spewing volcanic material up to 58 km into the atmosphere. It brought a nearly 15 m tsunami that crashed ashore, destroying villages, and creating a sonic boom that rippled around the world—twice.

Satellites orbiting Earth scrambled to capture images and data of the aftermath of the disaster. Almost a year later, you can now listen to a sonification of the largest eruption of the 21st Century, created using wind data from ESA’s Aeolus mission.

The volcano had erupted sporadically since 2009, but activity ramped up in late December 2021 as a series of eruptions sent bursts of volcanic gases spewing from the vent. The intense series of explosions began on 15 January 2022 and generated atmospheric shock waves, sonic booms and tsunami waves that traveled across the world. It also created a massive plume of water vapor that shot into Earth’s stratosphere—enough to fill more than 58 000 Olympic-size swimming pools.

Several Earth-observing satellites collected data before, during and after the eruption. Scientists working on the Aeolus Data Science Innovation Cluster used data from ESA’s Aeolus mission to track the volcanic explosion, thanks to near-realtime data from the Aeolus Virtual Research Environment.

In an interview with Wild Alchemy, ESA’s Tommaso Parrinello commented, “One of the most impressive aspects of the Aeolus mission is how quickly the data is with scientists—almost all of it in less than three hours. The data is displayed on a beautiful and user-friendly interface virtual research environment, called ViRES, from which we can easily detect trends.”

“With the Hunga Tonga eruption, the plume essentially blocked the satellite signal in the area of the eruption as they were injected into the otherwise ‘clean’ upper troposphere and lower stratosphere.”

A huge blip, or drop, in the Aeolus signal over the region of the eruption suggested the plume of volcanic ash must have reached an altitude above the range of Aeolus. The range of the Aeolus measurements was raised from 21 km to 30 km later on in January 2022, after which the satellite’s cloud observations clearly reflected the location of the ash plume in the stratosphere.

Tommaso explains, “Adjusting the satellite’s range slightly, added to its global coverage, meant our colleagues at European Centre for Medium-Range Weather Forecasts were able to track the transport of this plume as it traveled west in almost-real time. Thanks to the sensitivity of Aeolus to the volcanic particles, it was possible to see the effects even some months later.”

In a recent paper published in Communications Earth & Environment, a team of scientists showed the unprecedented increase in the global stratospheric water mass by 13% (relative to climatological levels) and a five-fold increase of stratospheric aerosol load—the highest in the last three decades.

Using a combination of satellite data, including data from ESA’s Aeolus satellite, and ground-based observations, the team found that due to the extreme altitude, the volcanic plume circumnavigated the Earth in just one week and dispersed nearly pole-to-pole in three months.

The unique nature and magnitude of the global stratospheric perturbation by the Hunga eruption ranks it among the most remarkable natural events in the modern observation era.

Even one year on, interest in the extraordinary explosive eruption remains. A sound artist has recently recreated the sonification of the underwater volcanic eruption using Rayleigh wind intensity signals provided by the ViRES platform.

Using wind data obtained on one of its overpasses over the ash cloud of the Hunga Tonga explosion, Jamie Perera used an audio sample of one of the shock waves, time-stretched it into a ghostly tone, and assigned it to harmonic values transcribed from 90 Aeolus readings taken over a duration of approximately 15 minutes.

The listener hears one reading every two seconds, in a harmonic range that spans six piano octaves, the highest of which can be heard at around 01:18 minutes when the readings show the eruption’s dust plume at its highest peak (over 20.5 km). The artistic intention behind the sonification was to evoke the otherworldly landscape of Hunga Tonga and other volcanoes.

Jamie commented, “It was important for me to work with the sound of the Hunga Tonga shockwaves, applied to the Aeolus data. I’m curious about how listening to the data can help us explore events like this from both factual and emotional perspectives.”