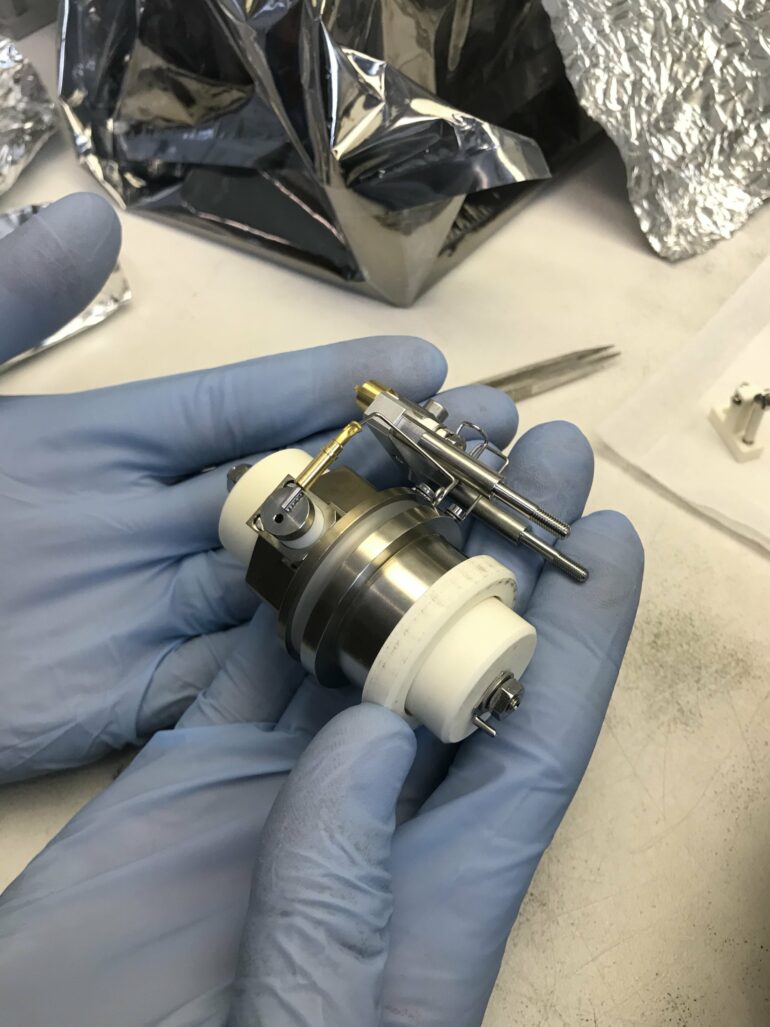 As space missions delve deeper into the outer solar system, the need for more compact, resource-conserving and accurate analytical tools has become increasingly critical—especially as the hunt for extraterrestrial life and habitable planets or moons continues.

A University of Maryland–led team developed a new instrument specifically tailored to the needs of NASA space missions. Their mini laser-sourced analyzer is significantly smaller and more resource efficient than its predecessors—all without compromising the quality of its ability to analyze planetary material samples and potential biological activity onsite. The team’s paper on this new device was published in the journal Nature Astronomy on January 16, 2023.

Weighing only about 17 pounds, the instrument is a physically scaled-down combination of two important tools for detecting signs of life and identifying compositions of materials: a pulsed ultraviolet laser that removes small amounts of material from a planetary sample and an Orbitrap analyzer that delivers high-resolution data about the chemistry of the examined materials.

“The Orbitrap was originally built for commercial use,” explained Ricardo Arevalo, lead author of the paper and an associate professor of geology at UMD. “You can find them in the labs of pharmaceutical, medical and proteomic industries. The one in my own lab is just under 400 pounds, so they’re quite large, and it took us eight years to make a prototype that could be used efficiently in space—significantly smaller and less resource-intensive, but still capable of cutting-edge science.”

The team’s new gadget shrinks down the original Orbitrap while pairing it with laser desorption mass spectrometry (LDMS)—techniques that have yet to be applied in an extraterrestrial planetary environment. The new device boasts the same benefits as its larger predecessors but is streamlined for space exploration and onsite planetary material analysis, according to Arevalo.

Thanks to its diminutive mass and minimal power requirements, the mini Orbitrap LDMS instrument can be easily stowed away and maintained on space mission payloads. The instrument’s analyses of a planetary surface or substance are also far less intrusive and thus much less likely to contaminate or damage a sample than many current methods that attempt to identify unknown compounds.

“The good thing about a laser source is that anything that can be ionized can be analyzed. If we shoot our laser beam at an ice sample, we should be able to characterize the composition of the ice and see biosignatures in it,” Arevalo said. “This tool has such a high mass resolution and accuracy that any molecular or chemical structures in a sample become much more identifiable.”

The laser component of the mini LDMS Orbitrap also allows researchers access to larger, more complex compounds that are more likely to be associated with biology. Smaller organic compounds like amino acids, for example, are more ambiguous signatures of life forms.

“Amino acids can be produced abiotically, meaning that they’re not necessarily proof of life. Meteorites, many of which are chock full of amino acids, can crash onto a planet’s surface and deliver abiotic organics to the surface,” Arevalo said. “We know now that larger and more complex molecules, like proteins, are more likely to have been created by or associated with living systems. The laser lets us study larger and more complex organics that can reflect higher fidelity biosignatures than smaller, simpler compounds.”

For Arevalo and his team, the mini LDMS Orbitrap will offer much-needed insight and flexibility for future ventures into the outer solar system, such as missions focused on life detection objectives (e.g., Enceladus Orbilander) and exploration of the lunar surface (e.g., the NASA Artemis Program). They hope to send their device into space and deploy it on a planetary target of interest within the next few years.

“I view this prototype as a pathfinder for other future LDMS and Orbitrap-based instruments,” Arevalo said. “Our mini Orbitrap LDMS instrument has the potential to significantly enhance the way we currently study the geochemistry or astrobiology of a planetary surface.”