How epithelial cells ward off viruses 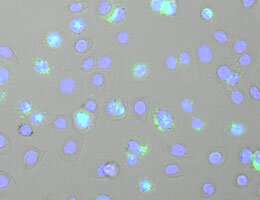 A team led by LMU’s Veit Hornung has shown that a protein found in skin cells recognizes a specific nucleic acid intermediate that is formed during virus replication. This recognition process subsequently induces a potent inflammatory response.

The ability to differentiate between self and potentially harmful non-self is vital for the integrity and survival of organisms. In most organisms, the so-called innate immune system is responsible for the recognition of such intruders. Among the proteins that perform this task is a class known as inflammasome sensors. Once activated, these sensors form inflammasome complexes, which then trigger a range of inflammatory responses that can in some cases lead to the death of the infected cell. A group of researchers led by LMU immunologist Veit Hornung, in cooperation with colleagues at the Technical University of Munich and the Max Planck Institute for Biochemistry, has now demonstrated that one such sensor found in skin cells binds directly to a specific molecular structure that arises during the replication of certain RNA viruses. The new findings underline the importance of epithelial cells as a barrier against invasive pathogens.

The NRLP1 protein was the first inflammasome sensor to be discovered and characterized. “However, up to now it had remained unclear whether NLRP1 really functions as a direct sensor for non-self molecules,” Hornung says. In humans, NLRP1 is found primarily in cells called keratinocytes, which form the outer layers of the skin and serve as a physical barrier against bacteria and viruses. The authors of the new study first tested how these cells react to viruses that differ in their modes of replication, and identified one—Semliki Forest Virus (SFV) – which strongly activated NLRP1. “Other cells known to have barrier functions, such as cells of the bronchial epithelia, also responded to this virus by activating NLRP1, so this seems to be a general phenomenon,” says Stefan Bauernfried, lead author of the new paper.

The Semliki Forest virus was first identified in Uganda, and serves as a useful experimental model in virology. It is found mainly in rodents, although it can also be transmitted to humans by mosquitos. SFV is a single-stranded RNA virus, i.e. its genetic material packaged in the virus capsid consists of a single strand of RNA. However, the process of virus replication entails the synthesis of a complementary strand, which pairs with the parental strand to yield a double-stranded RNA. The formation of double-stranded RNAs as replication intermediates is characteristic of many viruses. But such structures do not normally occur in the cells of higher organisms, which makes them good candidates for recognition by the innate immune system. Indeed, biochemical experiments confirmed that NRLP1 binds specifically to double-stranded RNA. “This type of sensor is difficult to work with, because they have a tendency to form aggregates,” Bauernfried explains. “Nevertheless, we were able to purify an NLRP1 construct, and we went on to show that is directly binds to and gets activated by double-stranded RNA.”

Taken together, the findings suggest that NLRP1 is a key factor in the recognition of viral infections in barrier tissues like the skin. It may be particularly important for the detection of viruses that are not optimally adapted to the potential host. Whether, and to what extent, it is also involved in the detection of other viruses which are pathogenic to humans remains unclear. “It’s not altogether unlikely that well adapted viruses have acquired the ability to inhibit this particular response mechanism,” Hornung suggests. “But that’s an issue which we intend to explore in future studies.”