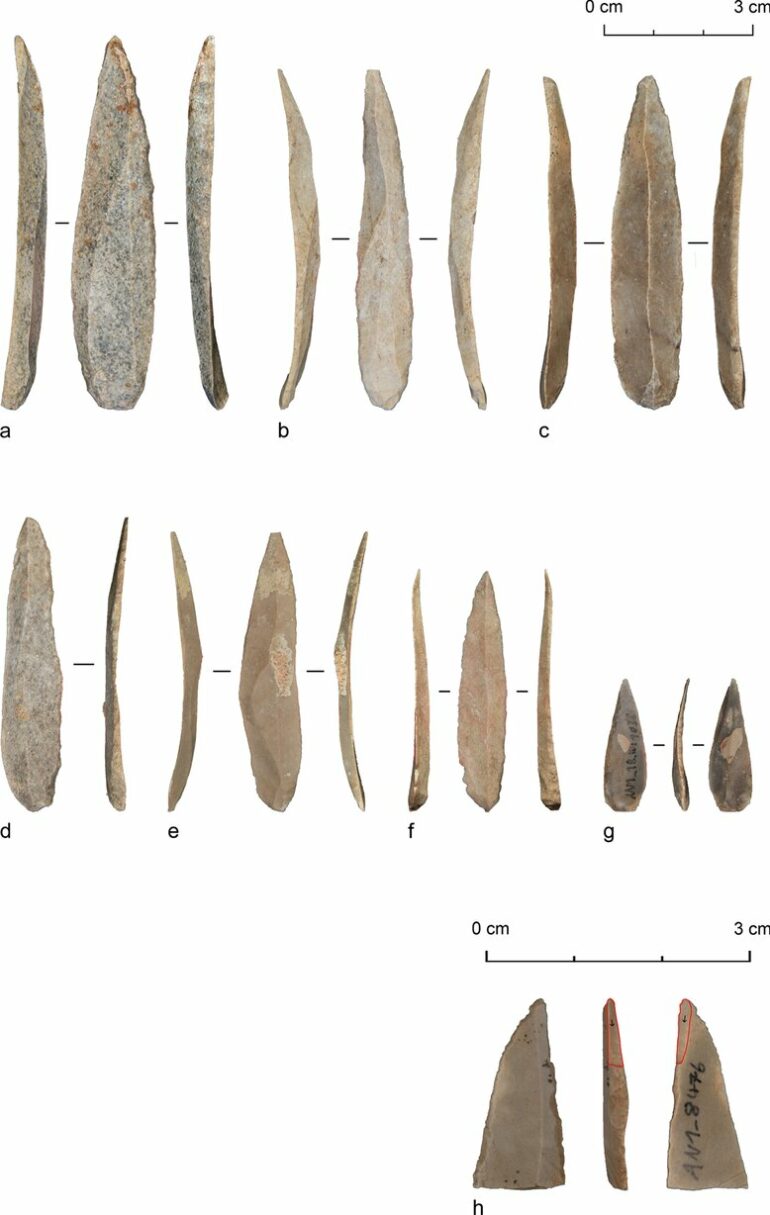 Analysis of stone tools attributed to the Ahmarian, the first Upper Paleolithic culture of the Near East (dated approximately 40,000 to 45,000 years ago) shows that small, elongated, symmetrical objects (bladelets) were mass-produced on-site. Such a standardized production is in line with what archaeologists have already suggested being linked to the bow and arrow introduction.

The most typical Ahmarian tool is the el-Wad point, a blade or bladelet made of flint that has an additional, intentional modification, a so-called retouch. They are one of the widespread variants of shaped spear or arrow tips of the early Upper Paleolithic. The new findings suggest that el-Wad points in Al-Ansab likely resulted from attempts to re-shape bigger, asymmetrical bladelet artifacts to reach quality standards of the unmodified bladelets, which are small, elongated and symmetrical.

This is the main result of the analysis carried out by Dr. Jacopo Gennai, Marcel Schemmel and Professor Dr. Jürgen Richter (Department of Prehistoric Archaeology, University of Cologne). The authors propose that the southern Ahmarian had already fully completed the technological and cultural shift to the preferred use of small bladelets, used as spear or even arrow tips. The article “Pointing to the Ahmarian. Lithic Technology and the El‑Wad Points of Al‑Ansab 1” has now been published in the Journal of Paleolithic Archaeology.

The site of Al-Ansab 1, located approximately 10 kilometers south of the well-known ruin city of Petra in Jordan, has been excavated since 2009 by a team from the University of Cologne led by Jürgen Richter. The site is important as it is one of the best-preserved pieces of evidence of the Ahmarian technocomplex recorded in an open-air context.

From 2018 to 2021, a representative part of the excavated material was re-analyzed by Jacopo Gennai, the lead author, to understand how the production methods of similar bladelets were within the extent of the early Upper Paleolithic. Moreover, Marcel Schemmel, a student member of Richter’s team, produced a new analysis of the el-Wad point, constraining its definition to more precise typo-metrical criteria.

The early Upper Paleolithic is identified as the cultural marker of our species’ final and successful push into Eurasia. Small, slender and highly standardized bladelets are thought to be what is left of arrows or throwing spears used in the open steppe environments of the time to catch ungulates. Bladelets then show the start of long-range hunting, a significant departure from previous hunting practices.

The new findings show that, rather than being mere residual products, the small bladelets were central for the success of Homo sapiens during the Upper Paleolithic. Being standardized and disposable, this flexible technology likely facilitated the successful dispersal of our species throughout Europe, as it allowed the groups to cover great distances in unknown territories without needing to rely on sources of big, good quality raw material.

“During the Upper Paleolithic, we have a proliferation of bladelets, but their role was not well established yet within the Ahmarian. We hope these new results will change our understanding of the earliest Upper Paleolithic industry of the Levant and push for new research to find the origins of this behavior that stayed with Homo sapiens until the end of the Paleolithic,” said Dr. Gennai.