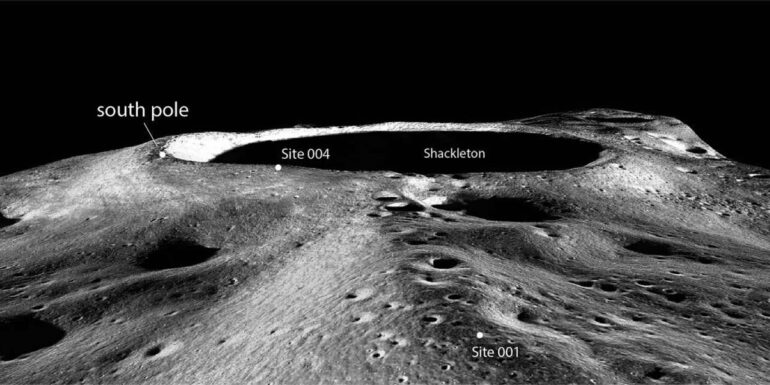 With the help of artificial intelligence, an international research team led by ETH Zurich has explored the moon’s permanently shadowed regions. The information they have obtained about the area’s surface properties will help to identify suitable locations for future lunar missions.

It was 1972 when the last humans landed on the moon. The Apollo program was discontinued thereafter. But interest in the moon has been rekindled. With China having landed a robot—and raised its flag—on the far side of the moon in 2020, NASA is planning for its Artemis program to land in the lunar south pole region, probably between 2025 and 2028. Astronauts will then concentrate their exploration in this area.

The fascinating potential of ice

What makes the south polar region so fascinating is that because the sun hovers near the horizon due to the moon’s axial tilt, the sunken floors of impact craters never see sunlight and lie in perpetual shadow. These shadowed regions are consequently incredibly cold—colder even than the surface of Pluto, with temperatures of around −170° to −240° Celsius and approaching absolute zero. At higher temperatures, ice would sublimate and very quickly turn into gas in the vacuum of space. But in this extreme cold, water vapor and other volatile substances can become trapped or frozen within or even on the lunar soil.

This potential for ice to be present makes those shadowed crater floors intriguing sites to explore. Not only might the ice harbor clues as to how water is integrated into the Earth–moon system, it could also prove to be an important resource to be used by future astronauts for consumption, radiation shielding or as rocket propellant.

No water ice detected yet

We are very much in the dark about the southern polar region of the moon. But now an international team of researchers has managed to shed some light by developing a method to better understand this region. Their work has appeared in the latest issue of Geophysical Research Letters. The lead author is Valentin Bickel, a postdoctoral researcher at the Chair of Glaciology and formerly at the Chair of Engineering Geology at ETH Zurich.

The team used images taken by the Lunar Reconnaissance Orbiter camera, which has been documenting the surface of the moon for over a decade. This camera captures photons that are bounced into the shadowed regions from adjacent mountains and crater walls. Now, with the help of artificial intelligence, the team has succeeded in making such efficient use of this data that these previously dark areas become visible. After analyzing their images, the team has determined that no water ice is visible in these shadowed areas of the moon—even though its existence has been proven by other instruments. Bickel says, “There is no evidence of pure surface ice within the shadowed areas, implying that any ice must be mixed with lunar soil or lie underneath the surface.”

The results published in the new paper are part of a comprehensive investigation of potential Artemis landing sites and exploration options on the lunar surface conducted by the LPI-JSC Center for Lunar and Science and Exploration. So far, the team has examined more than a half-dozen potential landing sites for Artemis missions. The study’s findings could have direct implications for future missions, including Intuitive Machines Mission 2, which will be conducted on a commercial basis by a start-up. This robotic mission in the spring of 2023 aims to collect and analyze the first soil samples from the shadowed areas of the moon’s south pole, before the astronauts reach the moon. “We have discovered a number of previously unknown shadowed craters and other surface features that could be critical to the location where the hopper lander touches down,” Bickel says.

These new research findings will allow for precise planning of routes into and through the permanently shadowed regions, which will greatly reduce the risks to which Artemis astronauts and robotic explorers are exposed. Thanks to the new images, astronauts can target specific locations to take samples and assess the distribution of ice.