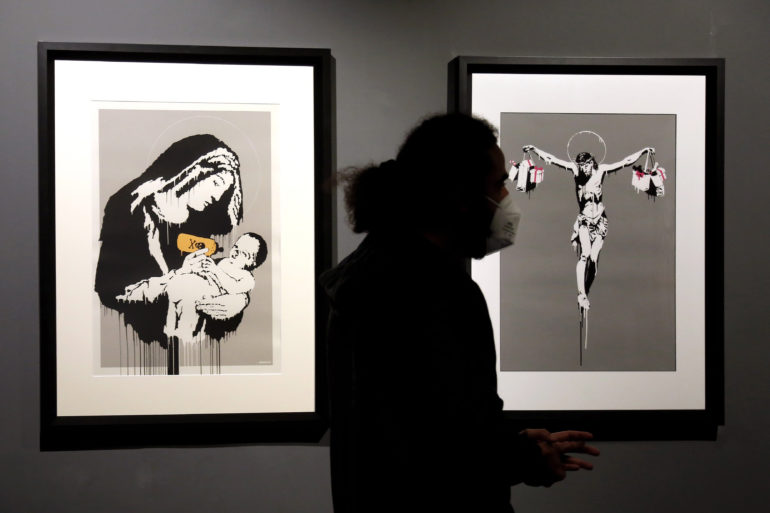 The website of street artist Banksy briefly directed users to an auction for a work of digital art that sold for more than $300,000. The problem? It wasn’t authentic.

A web page added to Banksy’s website Tuesday showed an image with an avatar resembling one of the many popular NFT collectibles known as CryptoPunks.

NFTs, or non-fungible tokens, are unique crypto tokens that are designed to represent ownership of a rare digital item, like art or sports memorabilia. Sales of such digital assets have surged to record highs this year thanks to rising interest in both cryptocurrencies and collectible items.

You can think of an NFT as a digital receipt of ownership. Buyers of the tokens effectively hold a certificate of authenticity to say they own the original item — but that doesn’t grant them copyright, and the media can still be viewed for free by other internet users.

Anyone who clicked on the Banksy NFT web page Tuesday would be directed to a link for an auction for a collectible called “Great Redistribution of the Climate Change Disaster.” The page was added to Banksy’s site Tuesday morning and later deleted, stoking speculation that the site may have been hacked.

The listing, posted on the OpenSea marketplace, ended early with the NFT selling for 100 ethereum tokens, worth around $336,000 at the time.

Banksy’s agency Pest Control confirmed the NFT was not created by the pseudonymous graffiti artist but did not comment on whether the Banksy website was hacked.

“The artist Banksy has not created any NFT artworks,” Pest Control told CNBC in an emailed statement Tuesday. “Any Banksy NFT auctions are not affiliated with the artist in any shape or form.”

In a strange twist, all of the money was later returned to the buyer, an anonymous male who goes by the pseudonym “Pranksy.”

“My ETH from the #Banksy #NFT purchase was just returned to me, ethical hacker proving a point?” Pranksy tweeted Tuesday.

“Just to add a comment, to those who feel this may have been some sort of stunt. I would never risk a future relationship with Banksy or any fine artist by hiring someone to hack their website and then buying an #NFT from myself, what an unusual day!”

The man had earlier told the BBC he was made aware of the NFT by an anonymous user on the social chat app Discord, and that he suspects this person may have hacked Banksy’s site.

“It remains unclear whether this episode was the work of a hacker, or perhaps a pre-planned work of art by Banksy himself,” said blockchain analytics provider Elliptic in a blog post Tuesday.

“Purchasing from verified locations is vital, but unfortunately this advice is flawed as soon as the authentic website is hacked,” Moore told CNBC. “Potential buyers should remain largely skeptical of NFTs while they are in these early stages, as they can be easily exploited, and always err on the side of caution.”

“Scammers are very good at manipulating people, and the makeup of NFTs lends itself to being abused even more due to the lack of a physical product or service,” Moore added.