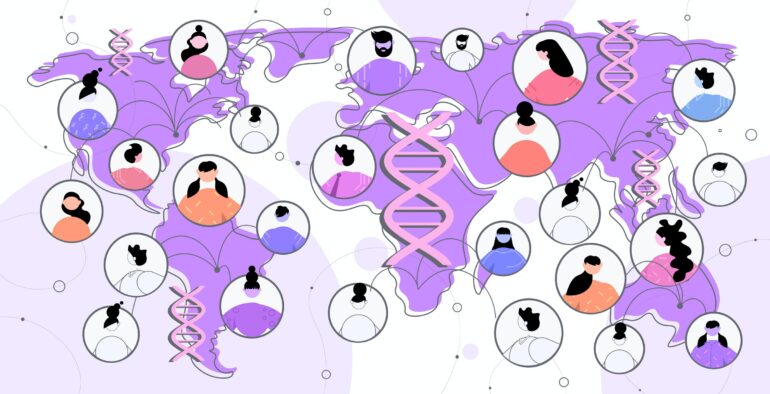 Mental illness is a growing public health problem. In 2019, an estimated 1 in 8 people around the world were affected by mental disorders like depression, schizophrenia or bipolar disorder. While scientists have long known that many of these disorders run in families, their genetic basis isn’t entirely clear. One reason why is that the majority of existing genetic data used in research is overwhelmingly from white people.

In 2003, the Human Genome Project generated the first “reference genome” of human DNA from a combination of samples donated by upstate New Yorkers, all of whom were of European ancestry. Researchers across many biomedical fields still use this reference genome in their work. But it doesn’t provide a complete picture of human genetics. Someone with a different genetic ancestry will have a number of variations in their DNA that aren’t captured by the reference sequence.

When most of the world’s ancestries are not represented in genomic data sets, studies won’t be able to provide a true representation of how diseases manifest across all of humanity. Despite this, ancestral diversity in genetic analyses hasn’t improved in the two decades since the Human Genome Project announced its first results. As of June 2021, over 80% of genetic studies have been conducted on people of European descent. Less than 2% have included people of African descent, even though these individuals have the most genetic variation of all human populations.

To uncover the genetic factors driving mental illness, I, Sinéad Chapman and our colleagues at the Broad Institute of MIT and Harvard have partnered with collaborators around the world to launch Stanley Global, an initiative that seeks to collect a more diverse range of genetic samples from beyond the U.S. and Northern Europe, and train the next generation of researchers around the world. Not only does the genetic data lack diversity, but so do the tools and techniques scientists use to sequence and analyze human genomes. So we are implementing a new sequencing technology that addresses the inadequacies of previous approaches that don’t account for the genetic diversity of global populations.

To study the genetics of psychiatric conditions, researchers use data from genome-wide association studies that compare the genetic variations between people with and without a particular disease. However, these data sets are mostly based on people of European ancestry, largely because research infrastructure and funding for large-scale genetics studies, and the scientists conducting these studies, have historically been concentrated in Europe and the United States.

One way to close this gap is to sequence genetic data from diverse populations. My colleagues and I are…